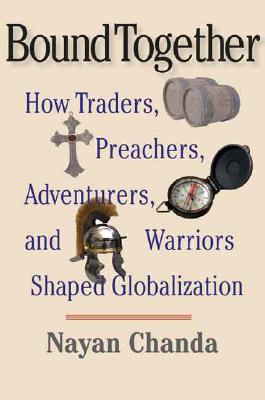 Since humans migrated from Africa and dispersed throughout the world, they have found countless ways and reasons to reconnect with each other. In this entertaining book, Nayan Chanda follows the exploits of traders, preachers, adventurers, and warriors throughout history as they have shaped and reshaped the world. For Chanda, globalization is a process of ever-growing interconnectedness and interdependence that began thousands of years ago and continues to this day with increasing speed and ease.
In the end, globalizationfrom the lone adventurer carving out a new trade route to the expanding ambitions of great empiresis the product of myriad aspirations and apprehensions that define just about every aspect of our lives: what we eat, wear, ride, or possess is the product of thousands of years of human endeavor and suffering across the globe. Chanda reviews and illustrates the economic and technological forces at play in globalization today and concludes with a thought-provoking discussion of how we can and should embrace an inevitably global world.

Praise For Bound Together: How Traders, Preachers, Adventurers, and Warriors Shaped Globalization…

"[An] engaging analysis. . . . This is a book filled with fascinating information. And Chanda makes the most of his training as both a journalist and a scholar, bringing to his tale a reporter''s eye and sense of pacing as well as an impressive breadth of knowledge."—Jeffrey N. Wasserstein, Newsweek
-Jeffrey N. Wasserstein

“Nayan Chanda has written an invaluable, and in my view unique, history of globalization—how the concept emerged, evolved, was defused, and has now come to define today''s international system. I learned a ton from this book, and I''ve already written two books on the subject. Students will find its analyses and anecdotes easily accessible and experts will find its arguments original and provocative. It is a real contribution to the literature—a must-read for anyone interested in understanding or teaching this subject.”—Thomas L. Friedman, author of The World Is Flat

“Bound Together is a graceful recounting of modern globalization with a panoramic perspective. Studded with meaningful and entertaining anecdotes, it is essential reading for anyone who wants to understand how we got where we are today.”—Joseph E. Stiglitz, Nobel laureate in economics
-Joseph E. Stiglitz

“A magnificent and masterly achievement. Nayan Chanda has taken a buzzword of our era, globalization, and defined it in the full, rich, complex context of a phenomenon that has shaped humanity over the millennia.  He conveys his prodigious knowledge with clarity, wit, and narrative verve, weaving themes from the history of science, politics, commerce, and religion into a coherent, compelling story.”—Strobe Talbott, president, The Brookings Institution

“’Bound Together is a wonderful book that provides us with a rich and holistic perspective on globalization. The book is a must for every student of globalization.”—R. Narayana Murthy, Chairman and Chief Mentor, Infosys Technologies Ltd.

“Bound Together is destined to be a classic book for the 21st Century. Author Nayan Chanda has combined deep and far-ranging scholarship with a journalist’s touch for story telling to craft an enthralling narrative of humankind from our birth in Africa to our addiction to the Internet. Chanda is a true global citizen. His book should be read in every home, school, business and embassy in the world, and become a vital part of our common intellectual heritage.”—Ambassador Derek Shearer, Chevalier Professor of Diplomacy and Director of Global Affairs, Occidental College, Los Angeles

"Chanda''s account of globalization is a breath of fresh air. His treatment of the topic, from its origins with the first humans out of Africa to its most recent appearance in financial markets, is comprehensive, informed, and judicious. Refreshingly personal and humorous, it is probably the best single-volume work on world/global history now available, and a must for all students of the subject. Along the way, India, for example, becomes as much a focus as Europe in the overall story."—Bruce Mazlish, Professor of History Emeritus, MIT
.

“It is, in my view, a wonderful read—incredibly informative, insightful, and written with energy, eloquence, and simplicity. The themes were fresh and the organization especially interesting. Some of the great strengths of the book are the way he relates history to the present, the global perspective throughout, the broader-than-economics focus; and the way he describes the overlap of forces that have led to the world we now live in. My guess is that this book will be widely read and have a special place on any bookshelf that contains works on globalization.”—Jeffrey Garten, former Dean and Juan Trippe Professor in the Practice of International Trade, Finance, and Business at the Yale School of Management

“Given the avalanche of books on globalization it is reasonable to assume that for now the subject has been exhausted. This assumption crumbles after one reads Nayan Chanda''s masterful analysis and discovers that this gifted writer has added a new and important layer to our understanding of why and how we are all ‘Bound Together.’ A must read.”—Moisés Naim, Editor in Chief, Foreign Policy

“This book is a breakthrough. It tells the story of why humanity is left with no other endgame than finding the principles and practices that will answer the question, How on Earth can we live together?”—Bo Ekman, founder and chairman, Tällberg Foundation

"In this richly engaging history of globalization, Chanda depicts today''s growing global interconnectedness as part of a larger drama that has unfolded over thousands of years, propelled by human impulses to explore, prosper, and dominate. The book''s narrative revolves around the stories of individuals and groups on the move across continents and eras."—Foreign Affairs


"A most readable history of human interconnectedness. The book reminds us of something important: Although globalization may seem to intrude unexpectedly in our lives, whether in the form of foreign capital or the SARS virus, all it really does is disclose to us who we already were. . . . This book tells a happy story, of a great community more voluntary than compulsory."—Gaurav Tiwari, New York Sun
-Gaurav Tiwari

“Nayan Chanda gives us in this volume an excellent account, both erudite and entertaining, of the globalization of human interaction. This book vividly portrays the long and sinuous, yet inexorable quest of humanity to reintegrate itself into just one family, as we once were.”—Ernesto Zedillo, Director Yale Center for the Study of Globalization, Former President of Mexico

"By unbundling the attributes of modern globalization and linking them to an almost endless chain of historical precedents, Mr. Chanda demystifies a phenomenon invested by its enemies with nearly satanic properties."—William Grimes, New York Times
-William Grimes

"A lively book that is packed with incident, anecdote and derring-do. . . . Mr. Chanda makes a solid and attractive case for globalisation and its potential as a force for good. But he also has a great deal of sympathy for globalisation''s losers."—Economist

"While most of us consider globalization to be a purely contemporary phenomenon—conjuring up images of multinational coffee chains and multilingual call centers—to Chanda it is as old as humanity itself, and as complex and unpredictable. . . . His encyclopedic survey of the forces and events that have connected individuals, societies and cultures is nimbly paced and punctuated by lively anecdotes. . ."—Ishaan Thardoor, Time
-Ishaan Thardoor

Nayan Chanda is director of publications, Yale Center for the Study of Globalization, and editor, YaleGlobal Online. He is former editor of the Far Eastern Economic Review and the Asian Wall Street Journal Weekly.
Loading...
or
Not Currently Available for Direct Purchase