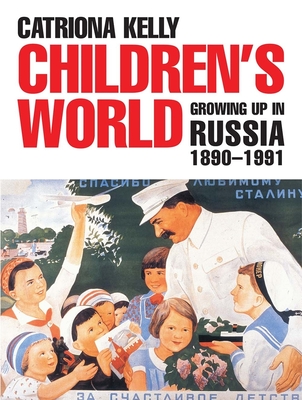 How a country views its children reveals a great deal about that country. This landmark history of childhood in twentieth-century Russia presents an enthralling and detailed picture of a society where childhood was celebrated everywhere but children’s real needs were often neglected by the state. Catriona Kelly, one of the foremost cultural historians of modern Russia, explores every aspect of children’s lives, including the stresses and joys of ordinary family life, friendships, sports and games, first love, clothing, and schools. She examines the experiences of children in institutions, orphanages, and Stalin’s camps, as well as the impact on their lives of such historical tragedies as revolution, civil and world war, and political purges. Based on unprecedented research in archives, hundreds of interviews, and the study of a huge range of newspapers, books, and pamphlets, the book has an immediacy which is startling. Over 100 illustrations sharpen the focus still more. Kelly weaves together information about the relationships between children and adults, prevailing ideas about childhood, and the actual experiences of children to create an unforgettable account of the intimate workings of Russian and Soviet society.

". . . the major reference book on Russian childhood. . . . it will be of immense interest to . . . readers . . . seeking to understand the effects of a Soviet childhood and the problem of trying to generalize . . . the diversity of educational practices."—Alexandra Smith, Modern Language Review

Catriona Kelly is professor of Russian, University of Oxford, and fellow of New College. She has published extensively on Russian cultural history, including most recently Comrade Pavlik: The Rise and Fall of a Soviet Boy Hero. She lives in Oxford, UK.