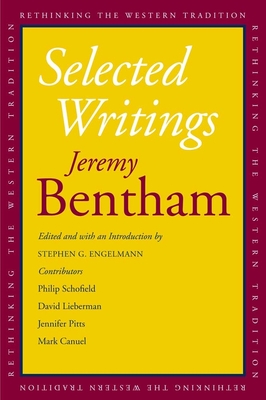 Jeremy Bentham (1748–1832), philosopher and reformer, is one of the most influential thinkers of the modern age. This introduction to his writings presents a representative selection of texts authoritatively restored by the Bentham Project, University College London. As well as more familiar pieces on utility, law, and politics/policy, highlights include the succinct essay “On Retrenchment” and a never-before-published treatise on sex. The volume is completed by major interpretative essays by Mark Canuel, David Lieberman, Jennifer Pitts, and Philip Schofield.

The texts included in the book are:

-An Introduction to the Principles of Morals and

-Panopticon, or, the Inspection-House, Letters 1, 2,

-Manual of Political Economy, Chapters 1 and 2

-Nonsense Upon Stilts (excluding the Observations

"This excellent collection ought to be in the library of every scholar working on eighteenth- and nineteenth-century law, public policy, and the public sphere. It brings together a superb introduction, carefully established texts, and illuminating essays."—Frances Ferguson, author of Pornography, The Theory: What Utilitarianism Did To Action

“This stimulating reader invites a fresh look at Bentham. Drawing on recent scholarship, it presents newly edited texts and unexpected perspectives on familiar works about sex, law, publicity, colonies, place and time, and much else besides.”—William Twining, University College London