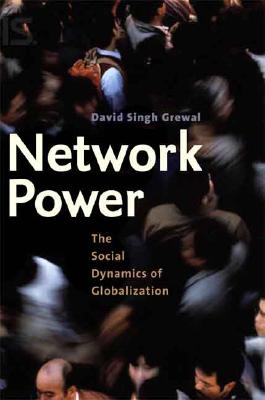 The Social Dynamics of Globalization

For all the attention globalization has received in recent years, little consensus has emerged concerning how best to understand it. For some, it is the happy product of free and rational choices; for others, it is the unfortunate outcome of impersonal forces beyond our control. It is in turn celebrated for the opportunities it affords and criticized for the inequalities in wealth and power it generates.David Singh Grewal's remarkable and ambitious book draws on several centuries of political and social thought to show how globalization is best understood in terms of a power inherent in social relations, which he calls "network power." Using this framework, he demonstrates how our standards of social coordination both gain in value the more they are used and undermine the viability of alternative forms of cooperation. A wide range of examples are discussed, from the spread of English and the gold standard to the success of Microsoft and the operation of the World Trade Organization, to illustrate how global standards arise and falter. The idea of network power supplies a coherent set of terms and conceptsapplicable to individuals, businesses, and countries alikethrough which we can describe the processes of globalization as both free and forced. The result is a sophisticated and novel account of how globalization, and politics, work.

Praise For Network Power: The Social Dynamics of Globalization…

"If globalization brings us closer together—to exchange goods and share ideas—why does it also make us feel less free?  David Grewal gives us a fresh and illuminating take on globalization and the challenge it poses for democratic politics. Of the mountain of books on globalization, Network Power stands out as one of the most original and insightful, a splendid synthesis of economics, philosophy, and political science in the grand tradition of moral and political economy."—Michael J. Sandel, author of Democracy''s Discontent
-Michael J. Sandel

"This is a major, learned and wide-ranging contribution to our understanding of the processes of globalization. Grewal, whose knowledge of sociological theory is thorough, studies globalization as the development of a complex and often contentious civil society across borders. He focuses on the diverse forms of network power and on the conflicts among conceptions of cooperation (particularly in the world economy). He also pays attention to the battle between this civil society of multiple networks, and the political sphere of multiple sovereignties that have not abdicated their traditional powers. An indispensable work."—Stanley Hoffmann, Harvard University

"Grewal''s analysis, presented in admirably clear, jargon-free prose, not only identifies the nature of power that characterizes the contemporary form of globalization but also proposes some of the means to counter that power and its structures of domination in the interest of a more free and democratic globalized world." —Michael Hardt, co-author of Empire and Multitude
-Michael Hardt

"A splendid book. Grewal''s account of network power is elegant and compelling, and his approach to debates on globalization is bold."—Jedediah Purdy, author of For Common Things and Being America

"In Network Power, David Grewal offers a unifying lens with which to view a set of otherwise disparate and confusing phenomena, thus helping us to understand better the underlying dynamics of present day globalization."—Sanjay Reddy, Barnard College and School of International and Public Affairs, Columbia University

"An ambitious and original new work of social theory. . . . Grewal wants to keep people and cultures from being flattened by the power of global networks."—George Scialabba, Boston Sunday Globe
-George Scialabba

"In this ambitious and broadly erudite work . . . Grewal seeks ''to avoid the bloodshed'' that followed earlier eras of globalization by focusing on what he terms ''network power''. . . . The book deepen[s] and enrich[es] the globalization debate in important ways. Essential."—Choice

"An excellent book. Straightforward and well written, it not only succeeds in establishing a framework to analyze issues of contemporary globalization, but does so in a way that opens up avenues for exploration of a wide range of other topics."--Jamaica Ai-Etsuko Brown, International Journal of Communication
-Jamaica Ai-Etsuko Brown

David Singh Grewal is a member of the Harvard Society of Fellows and an affiliated fellow of the Information Society Project at Yale Law School.
Loading...
or
Not Currently Available for Direct Purchase