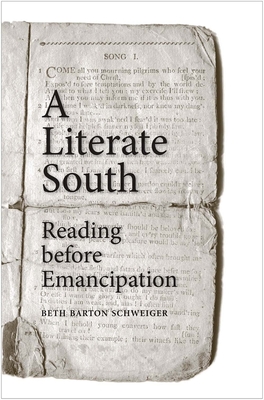 A provocative examination of literacy in the American South before emancipation, countering the long-standing stereotype of the South’s oral tradition

Schweiger complicates our understanding of literacy in the American South in the decades just prior to the Civil War by showing that rural people had access to a remarkable variety of things to read. Drawing on the writings of four young women who lived in the Blue Ridge Mountains, Schweiger shows how free and enslaved people learned to read, and that they wrote and spoke poems, songs, stories, and religious doctrines that were circulated by speech and in print. The assumption that slavery and reading are incompatible—which has its origins in the eighteenth century—has obscured the rich literate tradition at the heart of Southern and American culture.

Praise For A Literate South: Reading before Emancipation…

“Exhaustively researched and beautifully presented, A Literate South reveals a rural South populated by avid and enterprising consumers—both free and enslaved—and a world awash in cheap print. . . . A Literate South will be invaluable to historians of the book, but scholars of southern studies, education, and religion will also find much here that is provocative and even revelatory.”—C. Hutchison, University of Texas at Austin

"Beth Barton Schweiger's highly imaginative survey of antebellum print culture in the Virginia and North Carolina backcountry uncovers a rich world of avid readers who helped define themselves and their own version of modernity at a time when literacy served as a potent weapon in the slavery/antislavery debate."—Susan V. Donaldson, College of William and Mary

"Schweiger makes a persuasive case for the circulation and consumption of print in the rural antebellum South. In doing so, she offers an innovative take on what people do with print.”—Sarah Gardner, Mercer University

Beth Barton Schweiger taught for fifteen years at the University of Arkansas. She is the author of The Gospel Working Up and editor of Religion in the American South.
Loading...
or support indie stores by buying on