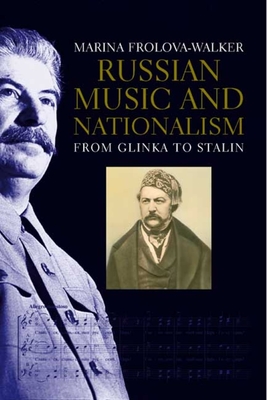 from Glinka to Stalin

Challenging what is widely regarded as the distinguishing feature of Russian music—its ineffable “Russianness”—Marina Frolova-Walker examines the history of Russian music from the premiere of Glinka's opera A Life for the Tsar in 1836 to the death of Stalin in 1953, the years in which musical nationalism was encouraged and endorsed by the Russian state and its Soviet successor.

The author identifies and discusses two central myths that dominated Russian culture during this period—that art revealed the Russian soul, and that this nationalist artistic tradition was founded by Glinka and Pushkin. The author also offers a critical account of how the imperatives of nationalist thought affected individual composers. In this way Frolova-Walker provides a new perspective on the brilliant creativity, innovation, and eventual stagnation within the tradition of Russian nationalist music.


Praise For Russian Music and Nationalism: from Glinka to Stalin…

"[This] was a book waiting to be written that very few could have attempted. . . . [It] is erudite in scope, sophisticated in critical and analytical discussion, and beautifully written, with a blessed absence of jargon or verbosity . . ."—Pauline Fairclough, Music & Letters
— Pauline Fairclough,

Marina Frolova-Walker is senior lecturer in music in the University of Cambridge and a fellow of Clare College.