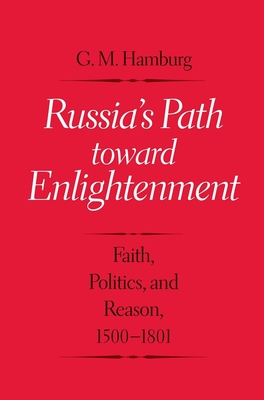 This book, focusing on the history of religious and political thinking in early modern Russia, demonstrates that Russia’s path toward enlightenment began long before Peter the Great’s opening to the West. Examining a broad range of writings, G. M. Hamburg shows why Russia’s enlightenment constituted a precondition for the explosive emergence of nineteenth-century writers such as Fedor Dostoyevsky and Vladimir Soloviev.

Praise For Russia's Path toward Enlightenment: Faith, Politics, and Reason, 1500-1801…

“This patient and persuasive book is the indispensible prehistory to the Russia we think we know, a country whose politics constantly disappoints. Hamburg does not whitewash that politics. But he does remind us that the Kantian values of autonomy, self-mastery, and secular reason are not the only Enlightenment possible; however imperfectly realized, more potent in Russia have always been the ideals of spiritual illumination and applied Christian ethics. This is intellectual history at its most empathetic, full of personal stories but without ever losing its analytic edge.”—Caryl Emerson, Princeton University
— Caryl Emerson

“This is the first comprehensive, in-depth survey of political thought in Russia from medieval times until the end of the eighteenth century. Hamburg does not subscribe to the usual interpretation of ever-increasing secularization and Europeanization. His account is more refined, and more convincing: Western thought sharpened Russian conceptual categories without completely erasing them. There was an enlightenment, but an indigenous one. This book will not be surpassed for years.”--Manfred Hildermeier, University of Göttingen
— Manfred Hildermeier

"Closely examining every important Russian thinker over a period of more than three hundred years, including several autocrats, Professor Hamburg has produced a magisterial grand narrative, from which there emerges a fresh interpretation of the Russian Enlightenment that will have enduring value for students of Russian intellectual history."-- Derek Offord, University of Bristol
— Derek Offord