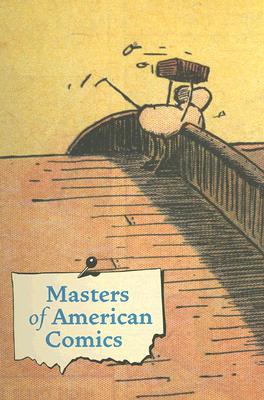 Comic strips and comic books were among the most popular and influential forms of mass media in 20thcentury America. This fascinating book focuses on fifteen pioneering cartoonists--ranging from Winsor McCay to Chris Ware--who brought this genre to the highest level of artistic expression and who had the greatest impact on the development of the form.Organized chronologically, "Masters of American Comics "explores the rise of newspaper comic strips and comic books and considers their artistic development throughout the century. Presenting a wide selection of original drawings as well as progressive proofs, vintage printed Sunday pages, and comic books themselves, the authors also look at how the art of comics was transformed by artistic innovation as well as by changes in popular taste, economics, and printing conventions.First appearing in newspaper Sunday supplements, the comic strip became immediately successful and created the largest audience of any medium of its time. The comic book first began as a way to print existing newspaper comics, then subsequently established the mass popularity of superheroes in the 1940s and 1950s before it matured as a vehicle for independent personal expression in the underground comic books and graphic novels of the 1960s.Included in the book are insightful and entertaining essays on individual artists written by major figures in the fields of comics, narrative illustration, literature, popular culture, and art history. "Masters of American Comics "convincingly positions the genre of comics into the history of art and is destined to become a classic text for years to come.

Praise For Masters of American Comics…

“The most important recent book about comics...When the text is itself a work of art, that’s an unexpected bonus.”

JOHN CARLIN is an independent writer and curator, specializing in the history of comics. He is also chief executive officer of Funny Garbage, a premier media developer in New York City. PAUL KARASIK is a cartoonist whose works have appeared in "The New Yorker "and "Nickelodeon "magazines. He was associate editor of "RAW "and published his own magazine, "Bad News. "He studied with Will Eisner, Harvey Kurtzman, and Art Spiegelman at the School of Visual Arts. BRIAN WALKER is a cartoonist and a founder of the International Museum of Cartoon Art. He has written and edited more than a dozen books, including "The Comics Since 1945."
or
Not Currently Available for Direct Purchase