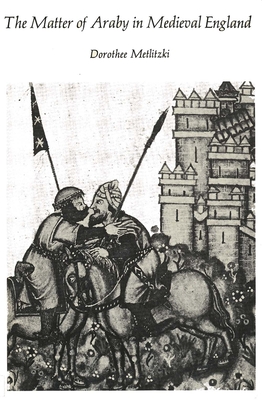 The Matter of Araby in Medieval England

To understand the significance of Arabic material in medieval literature, we must recognize the concrete reality of Islam in the medieval European experience.  Intimate contacts beginning with the Crusades yielded considerable knowledge about “Araby” beyond the merely stereotypical and propagandistic.  Arabian culture was manifest in scientific and philosophical investigations; and the Arab presence pervaded medieval romance, where caricatures of Saracens were not merely a catering to popular taste but were a way of coping emotionally with a real threat.
In England as well as in continental Europe, Islam figured in the best intellectual efforts of the age.  Dorothee Metlitzki considers “Scientific and Philosophical Learning” in Part One of this book and discusses the transmission of Arabian culture, by way of the Crusades, and through the courts of Sicily and Spain.  She sees the work of Latin translators from the Arabic in the twelfth and thirteenth centuries as the background of a medieval heritage of learning that expressed itself in the subject matter, theme, and imagery not only of a scholar-poet like Chaucer but also of the poets of popular romance.  In Part Two, “The Literary Heritage,” Metlitzki deals with Arabian source books, with Araby in history and romance, and with Mandeville’s Travels.  She concludes with a general assessment of the cultural force of Araby in England during the middle Ages.