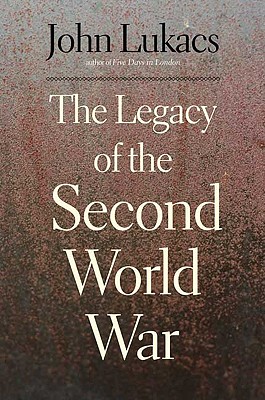 The Legacy of the Second World War

Sixty-five years after the conclusion of World War II, its consequences are still with us. In this probing book, the acclaimed historian John Lukacs raises perplexing questions about World War II that have yet to be explored. In a work that brilliantly argues for World War II's central place in the history of the twentieth century, Lukacs applies his singular expertise toward addressing the war's most persistent enigmas.

The Second World War was Hitler's war. Yet questions about Hitler's thoughts and his decisions still remain. How did the divisions of Europe and, consequently, the Cold War come about? What were the true reasons for Werner Heisenberg's mission to Niels Bohr in Copenhagen in September 1941? What led to Rainbow Five, the American decision to make the war against Germany an American priority even in the event of a two-ocean world war? Was the Cold War unavoidable? In this work, which offers both an accessible primer for students and challenging new theses for scholars, Lukacs addresses these and other riddles, revealing the ways in which the war and its legacy still touch our lives today.


Praise For The Legacy of the Second World War…

"Mr. Lukacs is one of the more incisive historians of the 20th century, and especially of the tangled events leading to World War II."—Joseph C. Goulden, Washington Times
-Joseph C. Goulden

“John Lukacs presents an original and complex analysis. The scholarship is thorough and impeccable, and the final product a highly nuanced discussion of major decisions and problems.”­—Stanley Payne, author of Franco and Hitler: Spain, Germany, and World War II

“Esteemed historian Lukacs . . . reminds readers that when it comes to WWII history, sections remain to be written, and what has been written departs from historical truth in certain ways.”—Booklist

John Lukacs is the author of some thirty books of history, including the acclaimed Five Days in London and Last Rites.
Loading...
or
Not Currently Available for Direct Purchase