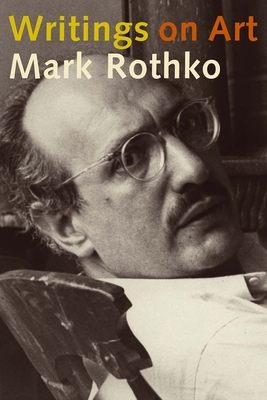 The first collection of Mark Rothko’s writings, which range the entire span of his career

While the collected writings of many major 20th-century artists, including Barnett Newman, Robert Motherwell, and Ad Reinhardt, have been published, Mark Rothko’s writings have only recently come to light, beginning with the critically acclaimed The Artist’s Reality: Philosophies of Art. Rothko’s other written works have yet to be brought together into a major publication. Writings on Art fills this significant void; it includes some 90 documents—including short essays, letters, statements, and lectures—written by Rothko over the course of his career. The texts are fully annotated, and a chronology of the artist’s life and work is also included.

This provocative compilation of both published and unpublished writings from 1934--69 reveals a number of things about Rothko: the importance of writing for an artist who many believed had renounced the written word; the meaning of transmission and transition that he experienced as an art teacher at the Brooklyn Jewish Center Academy; his deep concern for meditation and spirituality; and his private relationships with contemporary artists (including Newman, Motherwell, and Clyfford Still) as well as journalists and curators.

As was revealed in Rothko’s The Artist’s Reality, what emerges from this collection is a more detailed picture of a sophisticated, deeply knowledgeable, and philosophical artist who was also a passionate and articulate writer.

Praise For Writings on Art…

"Gathering all of the artist's writings held in public collections as well as texts in Rothko's descendants' hands, this book brings to light many of his theoretical stances, practical considerations and personal revelations. . . . This book will change the way Rothko is understood and should be required reading for scholars of his era."—Publishers Weekly

"Thanks to this rewarding book, it becomes possible to appreciate more fully than ever before, what [Rothko] thought his work as a painter and art educator were about. . . . A highly insightful look in to the ideas and beliefs that guided his professional painting career."—Burt Wasserman, Primetime A&E

Mark Rothko was born in Russia and came to the United States with his family in 1913. A major figure in New York’s Abstract Expressionist movement, he has been the subject of retrospectives at the Museum of Modern Art, the National Gallery of Art, Washington, the Guggenheim Museum, and other major museums around the world. Miguel López-Remiro is associate director at the Guggenheim Bilbao Museum.