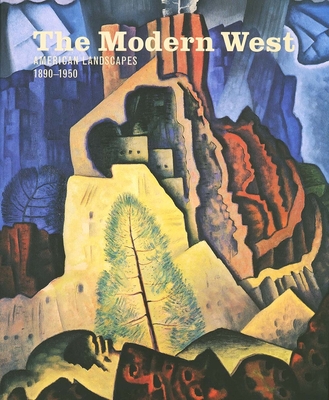 Drawing extensively from various disciplines including ethnology, geography, geology, and environmental studies, this groundbreaking book addresses shifting concepts of time, history, and landscape in relation to the work of pioneering American artists during the first half of the 20th century. Paintings, watercolors, and photographs by renowned artists such as Frederic Remington, Georgia O’Keeffe, Ansel Adams, Thomas Hart Benton, Dorothea Lange, and Jackson Pollock are considered alongside American Indian ledger drawings, tempuras, and Dineh sandpaintings. Taken together, these works document the quest to create a specifically American art in the decades prior to World War II.

The Modern West begins with a captivating meditation on the relationship between human culture and the physical landscape by Barry Lopez, who traveled the West in the artists’ footsteps. Emily Ballew Neff then describes the evolving importance of the West for American artists working out a radically new aesthetic response to space and place, from artist-explorers on the turn-of-the-century frontier, to visionaries of a Californian arcadia, to desert luminaries who found in its stark topography a natural equivalent to abstraction.
Beautifully illustrated and handsomely designed, this book is essential to anyone interested in the West and the history of modernism in American art.

Emily Ballew Neff, curator of American Painting and Sculpture at The Museum of Fine Arts, Houston, is author of numerous publications, including Frederic Remington. Barry Lopez, a distinguished nature writer and former landscape photographer, is author of the National Book Award–winning Arctic Dreams and numerous other works of fiction and nonfiction.