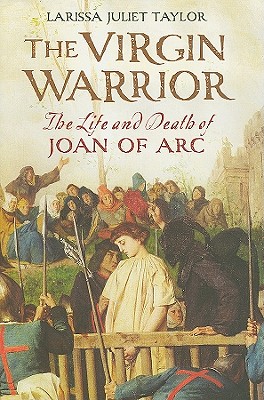 The Life and Death of Joan of Arc

France's great heroine and England's great scourge: whether a lunatic, a witch, a religious icon, or a skilled soldier and leader, Joan of Arc's contemporaries found her as extraordinary and fascinating as the legends that abound about her today. But her life has been so endlessly cast and recast that we have lost sight of the remarkable girl at the heart of it a teenaged peasant girl who, after claiming to hear voices, convinced the French king to let her lead a disheartened army into battle. In the process she changed the course of European history.

In The Virgin Warrior, Larissa Juliet Taylor paints a vivid portrait of Joan as a self-confident, charismatic and supremely determined figure, whose sheer force of will electrified those around her and struck terror into the hearts of the English soldiers and leaders. The drama of Joan's life is set against a world where visions and witchcraft were real, where saints could appear to peasants, battles and sieges decided the fate of kingdoms and rigged trials could result in burning at the stake. Yet in her short life, Joan emboldened the French soldiers and villagers with her strength and resolve. A difficult, inflexible leader, she defied her accusers and enemies to the end. From her early years to the myths and fantasies that have swelled since her death, Taylor teases out a nuanced and engaging story of the truly irresistible "ordinary" girl who rescued France.


Praise For The Virgin Warrior: The Life and Death of Joan of Arc…

". . . fresh points and analysis derived from many years of in-depth research and even more pondering. . . . [Joan''s] story will doubtlessly continue to be told. But few will tell it as well as Larissa Taylor has."—Kelly DeVries, Speculuma Journal of Medieval Studies
-Kelly DeVries

Larissa Juliet Taylor is Professor of History at Colby College. She is the author of the award-winning Soldiers of Christ: Preaching in Late Medieval and Reformation France and Heresy and Orthodoxy in Sixteenth Century Paris.
Loading...
or
Not Currently Available for Direct Purchase