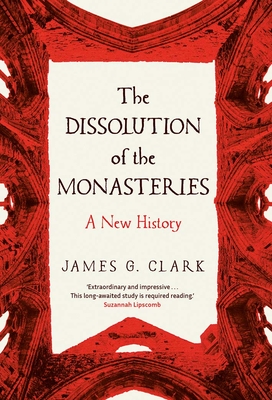 The Dissolution of the Monasteries

Shortly before Easter, 1540 saw the end of almost a millennium of monastic life in England. Until then religious houses had acted as a focus for education, literary, and artistic expression and even the creation of regional and national identity. Their closure, carried out in just four years between 1536 and 1540, caused a dislocation of people and a disruption of life not seen in England since the Norman Conquest.

Drawing on the records of national and regional archives as well as archaeological remains, James Clark explores the little-known lives of the last men and women who lived in England’s monasteries before the Reformation. Clark challenges received wisdom, showing that buildings were not immediately demolished and Henry VIII’s subjects were so attached to the religious houses that they kept fixtures and fittings as souvenirs. This rich, vivid history brings back into focus the prominent place of abbeys, priories, and friaries in the lives of the English people.

Praise For The Dissolution of the Monasteries: A New History…

“This extraordinary and impressive piece of scholarship, delivered in marvellously clear prose, offers a forensic investigation of how and why, under Henry VIII, monasticism in England was brought to such a swift and merciless end, and charts, as no other work has done, the profound social consequences of this seismic change. This long-awaited study is required reading.”—Suzannah Lipscomb, author of The King is Dead
— Suzannah Lipscomb

"Exceptional … The author's extensive research has unearthed a wealth of previously overlooked details that challenge centuries of controversy, rumour and misconception.  As well as providing a fresh perspective on well known characters such as Henry VIII and his 'henchman' Thomas Cromwell, the narrative brings the people who lived and worked in the monasteries vividly to life.  A stunning achievement."—Tracy Borman, author of Thomas Cromwell

"Establishes Professor Clark as the leading authority on Tudor monasticism and the experience of its end; and it is therefore now the main text in that major field."—Ronald Hutton, author of The Making of Oliver Cromwell
— Ronald Hutton

“This is a landmark book. Clark has swept away many old generalisations and assumptions in favour of a much more detailed and nuanced account of this social (as well as religious) revolution. The end result is nothing short of magnificent – yet also intricate, intimate, touchingly human and endlessly fascinating.”—Ian Mortimer, author of The Time Traveller’s Guide to Medieval England
— Ian Mortimer

James Clark is Professor of History at the University of Exeter. He has published widely on medieval monasteries and their place in the medieval world and he was historical advisor on the BBC TV series Tudor Monastery Farm.
Loading...
or support indie stores by buying on