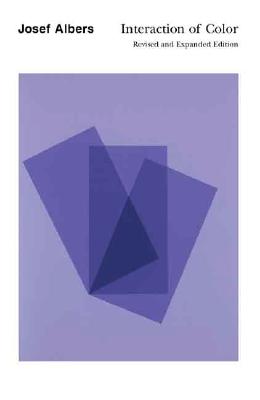 Josef Albers’s Interaction of Color is a masterwork in twentieth-century art education. Conceived as a handbook and teaching aid for artists, instructors, and students, this timeless book presents Albers’s unique ideas of color experimentation in a way that is valuable to specialists as well as to a larger audience.
Originally published by Yale University Press in 1963 as a limited silkscreen edition with 150 color plates, Interaction of Color first appeared in paperback in 1971, featuring ten representative color studies chosen by Albers. The paperback has remained in print ever since and is one of the most influential resources on color for countless readers.
This new paperback edition presents a significantly expanded selection of more than thirty color studies alongside Albers’s original unabridged text, demonstrating such principles as color relativity, intensity, and temperature; vibrating and vanishing boundaries; and the illusions of transparency and reversed grounds. Now available in a larger format and with enhanced production values, this expanded edition celebrates the unique authority of Albers’s contribution to color theory and brings the artist’s iconic study to an eager new generation of readers.

Josef Albers, one of the most influential artist-educators of the twentieth century, was a member of the Bauhaus group in Germany during the 1920s. In 1933 he came to the United States, where he taught at Black Mountain College for sixteen years. In 1950 he joined the faculty at Yale University as chairman of the Department of Design. The recipient of numerous awards and honorary degrees, Albers was the first living artist ever to be given a solo retrospective at The Metropolitan Museum of Art in New York. Nicholas Fox Weber is Executive Director of the Josef and Anni Albers Foundation.
Loading...
or
Not Currently Available for Direct Purchase