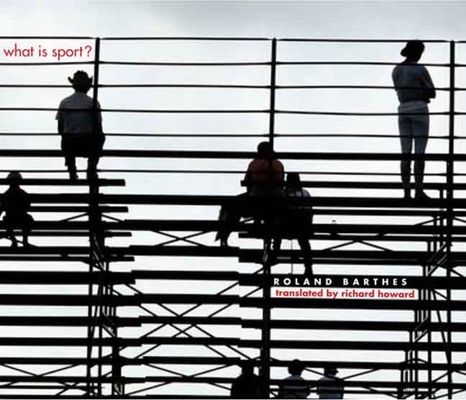 A poetic meditation on professional sport by one of the major figures of twentieth-century French Literature and thought, published in an elegant paperback gift edition

A little-known gem, the text of Barthes’s What Is Sport? was never reprinted in the Seuil editions of his Complete Works—neither the three-volume version nor the later five-volume edition. It is published here in a graceful and faithful English translation by Pulitzer Prize winner Richard Howard. Originally commissioned by the Canadian Broadcasting Corporation as the text for a documentary film directed by Hubert Aquin, What Is Sport? was written three years after the publication of Barthes’s Mythologies (1957) and bears considerable resemblance to that work. Some of Barthes’s best writing seems to have been inspired by popular culture.

Once again blurring the distinction between high and low, the great French literary theorist muses philosophically on the question: What is sport? In investigating the phenomenon of sport, Barthes considers five national sports: bullfighting (Spain), car racing (America), cycling (France), hockey (Canada), and soccer (England). For Barthes, sport is spectacle and serves the primary social function that theater once did in antiquity, collecting a city or nation within a shared experience. The real pleasure of this book, however, lies less in its generalities than in its fleeting, strangely haunting moments of insight. It makes an appropriate gift for any sport enthusiast as well as those interested in the writing of Roland Barthes.


Praise For What Is Sport?…

“No work by Roland Barthes should remain inaccessible to American readers. This short text is especially appealing for what it tells us about Barthes's idea of the role of sports in the life of man (clearly woman has no place here), and for its connection to the rest of Barthes’s work, in particular his Mythologies."—Alyson Waters, Yale University

“Full of paradoxes, surprising rapprochements, and the melancholy wisdom of which Barthes was always a master."—Peter Starr, University of Southern California

Roland Barthes (1915-1980) was one of the most influential French writers of the second half of the twentieth century. His seminal works include Writing Degree Zero, Mythologies, Criticism and Truth, S/Z, The Pleasure of the Text, and The Rustle of Language. Richard Howard is the author of eleven volumes of poetry, including Untitled Subjects, for which he received the Pulitzer Prize. He has published more than 150 translations from the French, including Baudelaire’s Les Fleurs du mal, for which he received the 1983 American Book Award for translation.