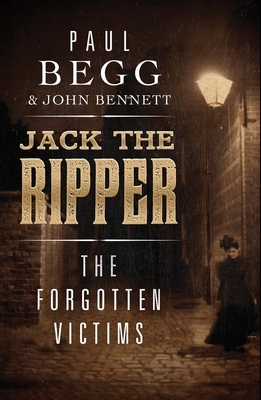 Experts agree that Jack the Ripper murdered five London women, but how many others did he slaughter in Britain or across the seas?

The number of women murdered and mutilated by Jack the Ripper is impossible to know, although most researchers now agree on five individuals. These five canonical cases have been examined at length in Ripper literature, but other contemporary murders and attacks bearing strong resemblance to the gruesome Ripper slayings have received scant attention. These unsolved cases are the focus of this intriguing book.

The volume devotes separate chapters to a dozen female victims who were attacked during the years of Jack the Ripper’s murder spree. Their terrible stories—a few survived to bear witness, but most died of their wounds—illuminate key aspects of the Ripper case and the period: the gangs of London’s Whitechapel district, Victorian prostitutes, the public panic inspired by the crimes and fueled by journalists, medical practices of the day, police procedures and competency, and the probable existence of other serial killers. The book also considers crimes initially attributed to Jack the Ripper in other parts of Britain and the world, notably New York, Jamaica, and Nicaragua. In a final chapter, the drive to find the identity of the Ripper is examined, looking at contemporary and later suspects as well as several important theories, revealing the lengths to which some have gone to claim success in identifying Jack the Ripper.

Praise For Jack the Ripper: The Forgotten Victims…

"Experts Begg and Bennett. . . successfully tread new ground in this thought-provoking book. . . . Refreshingly, they don't try to advance a new suspect, on the basis of evidence that could only be circumstantial. Instead, they do a convincing job of debunking myths."—Publishers Weekly

“[T]his is a punchy, passionate, forgivably inconclusive book about London’s tawdry past life, with a bit of murder thrown in for kicks."—Stefanie Marsh, The Times
— Stefanie Marsh

"Jack the Ripper: The Forgotten Victims provides much new and interesting detail. When it comes to the meticulous details of a murder, the minute-by-minute examination of a crime and its policing, Messrs. Begg and Bennett are the very best in the true-crime genre."—Judith Flanders, Wall Street Journal
— Judith Flanders