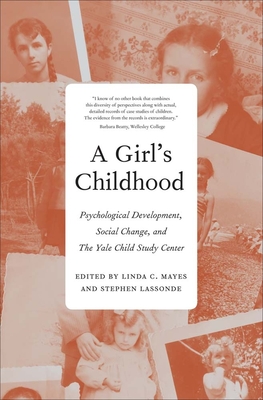 Sixty years ago, a group of prominent psychoanalysts, developmentalists, pediatricians, and educators at the Yale Child Study Center joined together with the purpose of formulating a general psychoanalytic theory of children’s early development. The group’s members composed detailed narratives about their work with the study’s children, interviewed families regularly and visited them in their homes, and over the course of a decade met monthly for discussion. The contributors to this volume consider the significance of the Child Study Center’s landmark study from various perspectives, focusing particularly on one child’s unfolding sense of herself, her gender, and her relationships.

“The various pieces assembled by Mayes and Lassonde make the importance of this project clear. As a Yale product it is a tribute to the university's willingness to try something as unusual as this undertaking was at the time.”—Paula S. Fass, University of California, Berkeley
— Paula S. Fass

“I know of no other book that combines this diversity of perspectives along with actual, detailed records of case studies of children. The evidence from the records is extraordinary.”—Barbara Beatty, Wellesley College
— Barbara Beatty

“Providing diverse perspectives on a unique study of one life, this volume deepens our understanding of how history and culture co-construct both the development of self and its systematic study.”—Frank Kessel, co-editor of Interdisciplinary Research: Case Studies from Health and Social Science
— Frank Kessel

“A formidable accomplishment and a gift to the scholarly community: this is the first thorough analysis we have of one of the richest archives in the history of the study of childhood. Its reflections on methodology will be of great interest to archivists and present-day longitudinal researchers, even as it finds a mandatory place on the shelf of all scholars of the history of childhood, the family, and mid-20th-century American psychoanalytic culture more generally.”—Anne Harrington, Harvard University
— Anne Harrington

Linda C. Mayes, M.D., is a developmental pediatrician, child and adult psychoanalyst, and researcher at the Yale Child Study Center and Distinguished Visiting Professor in Psychology at Sewanee, The University of the South. Stephen Lassonde is Dean of Student Life at Harvard University, where he also teaches courses on the history of childhood and concepts of age in the West.
Loading...
or support indie stores by buying on