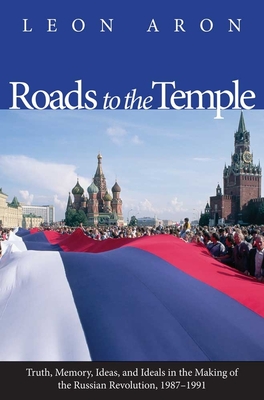 Roads to the Temple

Leon Aron considers the “mystery of the Soviet collapse” and finds answers in the intellectual and moral self-scrutiny of glasnost that brought about a profound shift in values. Reviewing the entire output of the key glasnost outlets in 1987-1991, he elucidates and documents key themes in this national soul-searching and the “ultimate” questions that sparked moral awakening of a great nation: “Who are we? How do we live honorably? What is a dignified relationship between man and state? How do we atone for the moral breakdown of Stalinism?”

Contributing both to the theory of revolutions and history of ideas, Aron presents a thorough and original narrative about new ideas’ dissemination through the various media of the former Soviet Union. Aron shows how, reaching every corner of the nation, these ideas destroyed the moral foundation of the Soviet state, de-legitimized it and made its collapse inevitable.

Praise For Roads to the Temple: Truth, Memory, Ideas, and Ideals in the Making of the Russian Revolution, 1987-1991…

“Leon Aron has written a book about the moral foundation of perestroika and the colossal reassessment of values, which brought about an unprecedented and, for many, unexpected shift in Russian history. These were the years when we tried to bring together politics and morality. Today, when Russia is again facing a crucial choice, it is very important to remember that time and the people who moved forward this difficult but necessary process of intellectual and then political transformation.”—Mikhail Gorbachev

“This is an outstanding work. No such extraordinary work on the ideas of perestroika and glasnost will be written.”—Anders Åslund, Senior Fellow, Peterson Institute for International Economics

“Human beings forget luminescent moments when the pursuit of human dignity lights up our world. Leon Aron does not allow us to forget the remarkable Soviet revolution of 1987-1991, a moment of moral clarity increasingly submerged in a miasma of deception.”—Blair Ruble, Director, Kennan Institute, Woodrow Wilson Center
— Blair Ruble

“From America's most insightful chronicler of Russian affairs comes a vividly drawn portrait of a country coming awake. Both erudite and gripping, passionate and yet rigorous, Roads to the Temple is a masterpiece of cultural and intellectual history.”—Daniel Treisman, author of The Return: Russia's Journey from Gorbachev to Medvedev
— Daniel Treisman

“Leon Aron's book is an indispensible guide to the forces that shaped Russia's years of glasnost and revolution, a work of intellectual history that is brimming with fresh insights and points the way to the great challenges facing Russian democracy today.”—David E. Hoffman, Pulitzer Prize-winning author of The Dead Hand: The Untold Story of the Cold War Arms Race and Its Dangerous Legacy

“Leon Aron’s wonderful, passionate book provides the fullest and most detailed portrait yet of the ideas and ideals that inspired the Russian Revolution of 1987-1991.”—William Taubman, Pulitzer Prize-winning author of Khrushchev: The Man and His Era.

"Scholars will forever disagree about what caused the great revolutions. But from now on anyone who tries to explain the fall of Soviet communism will have to read, and reckon with, Roads to the Temple. An extraordinary book."—Stephen Sestanovich, U.S. ambassador-at-large for the former Soviet Union, 1997-2001

“Mr. Aron …brings this history of Russian journalism to life with a fine attention to detail and a bold narrative sweep….Though far freer than it was in the Soviet ice age, Russian journalism lacks the sparkle, passion and integrity that it displayed in the vibrant era that Mr. Aron describes so well.”—Edward Lucas, Wall Street Journal
— Edward Lucas

“Delight and despair jostle in the mind when reading Leon Aron's masterly survey of the greatest period of Russian-language journalism…The delight is in the intoxicating evocation of freedom unleashed…Those who had been muzzled and misinformed for decades could suddenly find the truth and speak it. The despair lies in what came before and afterward.”—Edward Lucas, Wall Street Journal
— Edward Lucas

"Leon Aron’s book, a genuine tour de force, is a fascinating chronicle of the main ideas that caused and inspired the revolutionary upheaval in the USSR."—International Affairs

“Magisterial, beautifully written… [Aron’s] deeply researched and lyrical exploration of glasnost and the public debate it liberated is a testament to a national hunger for moral regeneration after decades of vicious tyranny and then mendacious and self-indulgent oligarchy.”—Mark Galeotti, Slavic Review
— Mark Galeotti

Leon Aron is Director of Russian Studies at the American Enterprise Institute for Public Policy Research. He is the author of Yeltsin: A Revolutionary Life and Russia's Revolution: Essays, 1989–2006.