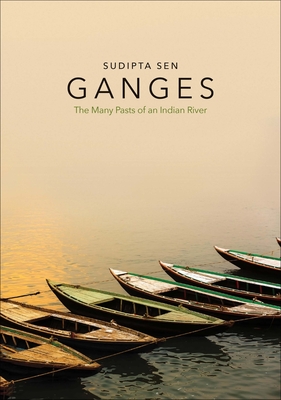 A remarkable portrait of the Ganges, India’s most sacred and important river and a potent symbol across South Asia.

"Indisputably the single best text on the Ganges and its history.”—Wall Street Journal

Originating in the Himalayas and flowing into the Bay of Bengal, the Ganges is India’s most important and sacred river. In this unprecedented work, historian Sudipta Sen tells the story of the Ganges, from the communities that arose on its banks to the merchants that navigated its waters, and the way it came to occupy center stage in the history and culture of the subcontinent.

Sen begins his chronicle in prehistoric India, tracing the river’s first settlers, its myths of origin in the Hindu tradition, and its significance during the ascendancy of popular Buddhism. In the following centuries, Indian empires, Central Asian regimes, European merchants, the British Empire, and the Indian nation-state all shaped the identity and ecology of the river. Weaving together geography, environmental politics, and religious history, Sen offers in this lavishly illustrated volume a remarkable portrait of one of the world’s largest and most densely populated river basins.

Praise For Ganges: The Many Pasts of an Indian River…

“A beguiling, if somewhat sorrowful, account, both a historical biography of the river and, in a way, its obituary. . . . Pleasingly written and indisputably the single best text on the Ganges and its history.”—Wall Street Journal

"Sudipta Sen’s Ganges: The Many Pasts of an Indian River invites its reader across the space and time of this iconic riverscape. Through a sweeping yet carefully textured history, the layers of the Ganges’s past assume a life that is both consequential and contemporary. We come to understand the Ganges as an expansive and dynamic social and natural system, and we gain a clearer perspective on the river’s present and potential futures."—Anne Rademacher, Science

Longlisted for the ICAS Book Prize, in the Social Sciences Category, sponsored by the International Convention of Asia Scholars (ICAS)

“This stunningly original, beautifully crafted book is the best history of the Ganges that currently exists. At once a work of 'deep' history, of intellectual and cultural history, and of religious studies, it is informed by Sen’s own extensive travels along the course of the river, which give the narrative a sense of immediacy and engagement. This is deep, patient scholarship of a kind that one rarely sees.”—Sunil Amrith, author of Crossing the Bay of Bengal


"A remarkable achievement, this cultural, economic, political, and even ecological history of India's sacred river offers us a new way of thinking about the past and its links with the present as much as the future. Focusing on the materiality of objects and practices as well as stories and memories, Sen's beautifully written book should serve as a model for historians, anthropologists, and others interested in the meaning of civilization."--Faisal Devji, University of Oxford

"Ganges is for anyone interested in the history of India or the story of people in a landscape. Sudipta Sen blends geology and ecology with the legendary in a way that is scholarly and sophisticated while always entertaining and often moving to read. Its scope is vast and its accomplishment deeply impressive."—Ruth Harris, University of Oxford

"Written in celebration of the Ganges but tinged with a deep sense of mourning, Sen's book tells of the great river as a nurturer of land, armies, successive layers of civilizations and dynasties, and as a repository for human sin and toxic waste, forcing us to grapple with the river's rich past and its most uncertain future."--  Martha Ann Selby, The University of Texas at Austin

Sudipta Sen is professor of history at the University of California, Davis, and the author of Distant Sovereignty: National Imperialism and the Origins of British India. He lives in Woodland, CA.
Loading...
or
Not Currently Available for Direct Purchase