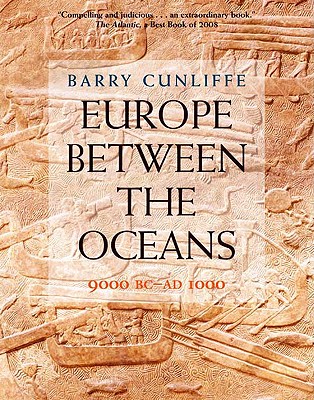 Europe Between the Oceans

In this magnificent book, distinguished archaeologist Barry Cunliffe reframes our entire conception of early European history, from prehistory through the ancient world to the medieval Viking period. Cunliffe views Europe not in terms of states and shifting political land boundaries but as a geographical niche particularly favored in facing many seas. These seas, and Europe's great transpeninsular rivers, ensured a rich diversity of natural resources while also encouraging the dynamic interaction of peoples across networks of communication and exchange. The development of these early Europeans is rooted in complex interplays, shifting balances, and geographic and demographic fluidity.

Drawing on archaeology, anthropology, and history, Cunliffe has produced an interdisciplinary tour de force. His is a bold book of exceptional scholarship, erudite and engaging, and it heralds an entirely new understanding of Old Europe.

"This is a truly remarkable book... It is immensely readable and totally authoritative... No one could read this book, one of its distinguished author''s finest achievements, without pleasure and profit. Simply put, it is excellent: original, exciting and a delight to read"—Roger Collins, author of Visigoth Spain, 409-711 and Early Medieval Europe, 300-1000
-Roger Collins

“Cunliffe has written an extraordinary book, which is the culmination of a lifetime’s research and thinking about early European history. This is archaeology that truly is history, a definitive account of early Europe from its beginnings to medieval times that draws effortlessly on a myriad of sources. Archaeologists, general readers, and historians alike will delight in this historical tapestry.”—Brian Fagan, Emeritus Professor of Anthropology, University of California, Santa Barbara, and author of The Long Summer

"Cunliffe provides an enthralling history of Europe from end of the last ice age to the brink of global exploration, an extraordinary story told with unsurpassed knowledge and insight." - Steven Mithen, author of After the Ice: A Global Human History 20,000-5000 BC

"This book is an achievement of astonishing scope: the first to present the whole prehistory of Europe from the origins of farming to the rise of urban society with evident authority, and then to go on to review the Roman world right through to the dawn of the Middle Ages. A pioneering work of synthesis on a continental scale, this is the first coherent overview of the origins of Europe which meets the challenge of treading the path from prehistory into the full light of history. Only an archaeologist could have written it, yet Professor Cunliffe has an impressive grasp also of the historical sources for the Roman world and its aftermath. His easy style should please the general reader, while the boldness and assurance of his masterly treatment will challenge and intrigue the specialist." - Lord Colin Renfrew, Formerly Disney Professor of Archaeology and Director of the McDonald Institute for Archaeological Research, University of Cambridge

“When history is written in this way, conventional priorities are overthrown. . . . An admirable distillation of an enormous amount of evidence—full of what is beautiful, interesting and true.”—James Fenton, The Sunday Times (London)

"Europe Between the Oceans, at once compelling and judicious, is an extraordinary book. A work of analytical depth and imaginative sweep. . . . Lavishly illustrated and replete with a sumptuous array of creatively conceived color maps . . ."—Benjamin Schwarz, Atlantic Monthly
-Benjamin Schwarz

"Vibrant. . . . Europe Between the Oceans is eminently readable [and] synthesizes major themes in archaeology and history. . . . One of the most accessible discussions available."—Cheryl Ward, International Journal of Maritime History
-Cheryl Ward

"This tale is a human one, admirably told within a variety of geographical and ecological contexts. . . . Remarkable. . . . Europe between the Oceans is a model of interdisciplinary environmental history and a thoroughly enjoyable work. Cunliffe gracefully distills the essence of European development across a span of time as few authors would attempt, and he does so without sacrificing detail. It is admirable in its accessibility, currency, and scope, with much to offer general readers as well as historians and archaeologists."—Vicki Ellen Szabo, Journal of World History
-Vicki Ellen Szabo

Barry Cunliffe is one of the most important and distinguished archaeologists in Europe. He is professor of archaeology at the University of Oxford and is the author of over fifteen books. He lives in Oxford, UK.
Loading...
or
Not Currently Available for Direct Purchase