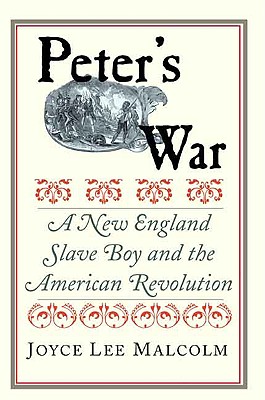 A New England Slave Boy and the American Revolution

A boy named Peter, born to a slave in Massachusetts in 1763, was sold nineteen months later to a childless white couple there. This bookrecounts the fascinating history of how the American Revolution came to Peter's small town, how he joined the revolutionary army at the age of twelve, and how he participated in the battles of Bunker Hill and Yorktown and witnessed the surrender at Saratoga.

Joyce Lee Malcolm describes Peter's home life in rural New England, which became increasingly unhappy as he grew aware of racial differences and prejudices. She then relates how he and other blacks, slave and free, joined the war to achieve their own independence. Malcolm juxtaposes Peter's life in the patriot armieswith that of the life of Titus, a New Jersey slave who fled to the British in 1775 and reemerged as a feared guerrilla leader.

A remarkable feat of investigation, Peter's biography illuminates many themes in American history: race relations in New England, the prelude to and military history of the Revolutionary War, and the varied experience of black soldiers who fought on both sides.


Praise For Peter's War: A New England Slave Boy and the American Revolution…

“From the fogs of war and hidden records, Joyce Lee Malcolm has retrieved this amazing story of slavery and freedom in the midst of the American Revolution. With graceful, old-fashioned narrative style, Malcolm tells the story of Peter, an African American youth whose footprints traversed many battlefronts of the Revolution. Peter''s voice is elusive, but his life left many traces. He saw and fought the war, returned to his Massachusetts home, lived and worked as a farmer, and died far too young. This book is a marvelous example of what can be learned from heretofore unknown people, and a beautifully-told tale about the ugliest underside of American history.”—David W. Blight, author of A Slave No More: Two Men Who Escaped to Freedom, Including Their Own Narratives of Emancipation
-David W. Blight

“In this deeply researched and generously wrought book, Joyce Lee Malcolm penetrates the past’s shadows and helps us recover the life of an American boy relegated to obscurity—until now.”—Wilfred M. McClay, University of Tennessee at Chattanooga

"A well-written and important contribution to our understanding of the black experience during the Revolution."—Edward Rugemer, Yale University

Joyce Lee Malcolm is professor of law at George Mason University School of Law. She lives in Alexandria, VA.
Loading...
or
Not Currently Available for Direct Purchase