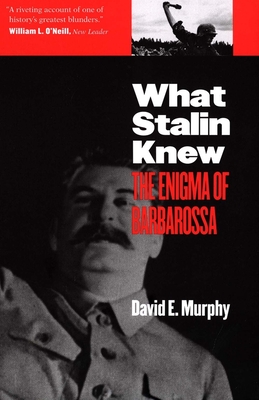 The Enigma of Barbarossa

“A riveting account of one of history’s greatest blunders.”—William L. O’Neill, The New Leader

This extensively researched book illuminates many of the enigmas that have surrounded the Nazi invasion of the Soviet Union, offering keen insights into Stalin’s thinking and the reasons for his catastrophic blunder.

“If, after the war, the Soviet Union had somehow been capable of producing an official inquiry into the catastrophe of 6/22—comparable in its mandate to the 9/11 commission here—its report might have read a little like [this book]. . . .  Murphy brings to his subject both knowledge of Russian history and an insider’s grasp of how intelligence is gathered, analyzed and used—or not.”—Niall Ferguson, New York Times Book Review

"A fascinating and meticulously researched account of mistaken assumptions and errors of judgment that culminated in Hitler’s invasion of Russia in June 1941. Never before has this fateful period been so fully documented."—Henry A. Kissinger

David E. Murphy, now retired, was chief of CIA’s Berlin base from the early 1950s to 1961 and then became chief of Soviet operations at CIA headquarters in the U. S. He is coauthor of Battleground Berlin: CIA vs. KGB in the Cold War, also published by Yale University Press.