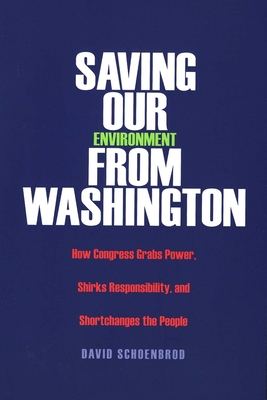 Saving Our Environment from Washington

How Congress Grabs Power, Shirks Responsibility, and Shortchanges the People

A veteran environmentalist tells vivid tales of the environmental wars and arrives at a surprising conclusion.

Congress empowered the Environmental Protection Agency on the theory that only a national agency that is insulated from accountability to voters could produce the scientifically grounded pollution rules needed to save a careless public from its own filth. In this provocative book, David Schoenbrod explains how his experience as an environmental advocate brought him to this startling realization: letting EPA dictate to the nation is a mistake.

Through a series of gripping and illuminating anecdotes from his own career, the author reveals the EPA to be an agency that, under Democrats and Republicans alike, delays good rules, imposes bad ones, and is so big, muscle-bound, and remote that it does unnecessary damage to our society. EPA stays in power, he says, because it enables elected legislators to evade responsibility by hiding behind appointed bureaucrats. The best environmental rules—those that have done the most good—have come when Congress had to take responsibility or from states and localities rather than the EPA.

With the passion of an authentic environmentalist, Schoenbrod makes a sensible plea for “bottom-up” environmental protection now. The responsibility for pollution control belongs not in agencies but in legislatures, and usually not at the federal level but rather closer to home.

David Schoenbrod is trustee professor, New York Law School, and adjunct scholar, Cato Institute. During his tenure as an attorney for the Natural Resources Defense Council, he initiated litigation to force the EPA to reduce lead in gasoline and other environmental cases of particular importance to minorities and the poor.
Loading...
or support indie stores by buying on