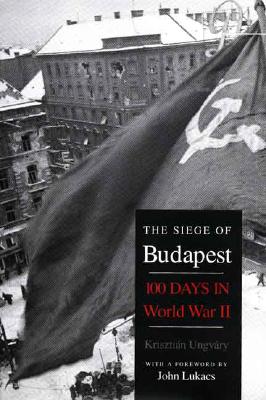 The Siege of Budapest

This definitive history of one of the fiercest battles of World War II describes the siege of Budapest in unprecedented detail. Both Stalin and Hitler demanded victory at all costs, and the cost was extreme: 80,000 Soviet troops, 38,000 German and Hungarian soldiers, and 38,000 Hungarian civilians perished. The book provides the first full account of this shocking battle.

“As a military history [The Siege of Budapest] is unrivaled. . . . Magisterial.”—John Lukacs, New York Review of Books

“An exceedingly dramatic book, filled with fascinating stories, some of them even humorous, and with heart-rending accounts of suffering, limitless cruelty, and amazing decency.”—István Deák, New Republic

"Ungváry has written a dramatic, gripping history of this siege, filling a gap in WWII history."—Choice

Krisztián Ungváry is a research fellow at the Institute for the History of the 1956 Hungarian Revolution. Ladislaus Löb is emeritus professor of German, University of Sussex.
Loading...
or
Not Currently Available for Direct Purchase