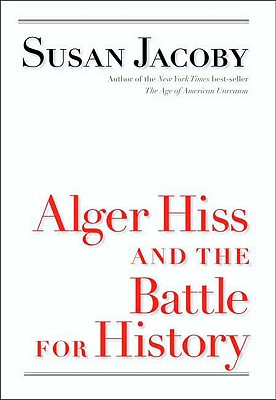 Alger Hiss and the Battle for History (Hardcover)

Books on Whittaker Chambers and Alger Hiss abound, as countless scholars havelabored to uncover the facts behind Chambers's shocking accusation before the House Committee on Un-American Activities in the summer of 1948 that Alger Hiss, a former rising star in the State Department, had been a Communist and engaged in espionage.

In this highly original work, Susan Jacoby turns her attention to the Hiss case, including his trial and imprisonment for perjury, as a mirror of shifting American political views and passions. Unfettered by political ax-grinding, the author examines conflicting responses, from scholars and the media on both the left and the right, and the ways in which they have changed from 1948 to our present post Cold War era. With a brisk, engaging style, Jacoby positions the case in the politics of the post World War II eraand then explores the ways in which generations of liberals and conservatives have put Chambers and Hiss to their own ideological uses. An iconic event of the McCarthy era, the case of Alger Hiss fascinates political intellectuals not only because of its historical significance but because of its timeless relevance to equally fierce debates today about the difficult balance between national security and respect for civil liberties.

Susan Jacoby is an independent scholar and best-selling author. The most recent of her seven previous books is "The Age of American Unreason." She lives in New York City.

Praise For Alger Hiss and the Battle for History…

"There is a lifetime of erudition—about American society, the Soviet Union, and the way people bend their perceptions to fit their beliefs—in this wise and careful look at an episode that for decades inspired heated diatribes. Jacoby points out that those of us who don''t believe in Hiss''s innocence should still care about the issues of civil liberties that the case raised—and which are still highly relevant today."—Adam Hochschild, author of Half the Way Home and Bury the Chains

“Jacoby offers a sprightly and thoughtful overview of the Hiss case, and considers its impact on several generations of liberal and conservative intellectuals. Her nuanced conclusions may not win the approval of either pro- or anti-Hiss partisans, but should prove all the more useful to the general reader.”—Maurice Isserman, Hamilton College
-Isserman, Maurice

“Fascinating, accessible, and persuasive, Susan Jacoby makes it clear why the Hiss case and the diverse responses to and uses of it matter. She will upset, if not outrage, people on both sides of the political spectrum.”—Harvey J. Kaye, author of Thomas Paine and the Promise of America
-Kaye, Harvey J.

"[The] book is most memorable for the passion with which Jacoby trumpets certain sensible but often overlooked truths."—David Greenberg, The Washington Post