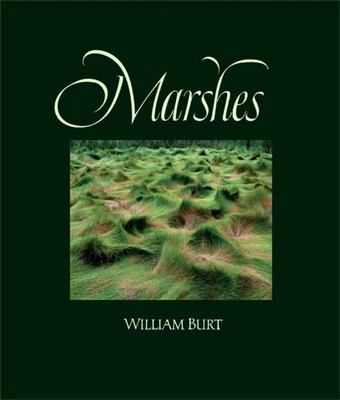 An intimate photographic portrait of the marsh as few have ever seen it—exquisitely subtle, mysterious, and teeming with rare birds and flora

Drawn since boyhood to the beauty and allure of marshes, naturalist William Burt has prowled them by day and night, in every season, from one edge of North America to the other. For thirty years he has hauled his large-format camera with him, seeking to capture on film the elusive birds, the wildflowers and grasses, and the unique wild beauty of the marshes. In this breathtakingly lovely book, he selects ninety of his most striking photographs. He also offers his reflections on the marshes he has visited, inviting his readers to come with him and become acquainted with this hidden world, its richness, and its vulnerability. Burt explores marshes near and far, from Connecticut to Manitoba, the Gulf of Mexico, California’s Central Valley, the Northern Plains, and elsewhere. His photographs explore all aspects and seasons of marsh life but focus especially on such shy inhabitants as rails, bitterns, grebes, and gallinules. While the photographs tell stories of their own, Burt’s narrative invokes the marshes of the past and compares them to today’s, with prose as picture-sharp as the photography. No book has ever evoked the mystery and beauty of the marshes so compellingly as this by William Burt. And no reader, having accompanied the author to this secret world, will fail to appreciate the rare privilege of having been there.


Praise For Marshes: The Disappearing Edens…

"Burt's photographs and passion bring forth the majesty of marshes and their inhabitants, causing the reader to long to visit."—Laura Meyerson, University of Rhode Island

“Burt’s magnificent photos stand as a statement of why marshes are true Edens.”—Noble S. Proctor, ornithologist

“Burt is passionate about his subject and conveys that through his sensational photos. His book will instill in any reader a love and appreciation for marshes.”—Meg Lowman, author of Life in the Treetops and It’s A Jungle Up There

William Burt is a naturalist, photographer, and writer with a passion for wild places and elusive birds. He is the author of two previous books, and his photographs and stories have appeared in Smithsonian, Audubon, National Wildlife, and other magazines. He lives in Old Lyme, CT.
or
Not Currently Available for Direct Purchase