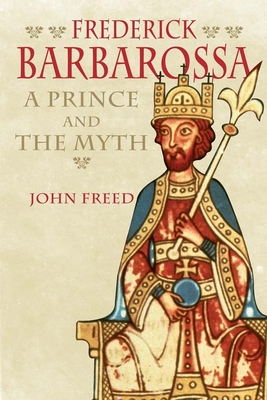 The Prince and the Myth

A rich portrait of Frederick Barbarossa, the medieval monarch who ruled Germany in cooperation with the princes and whose legend inspired Hitler to label his invasion of the Soviet Union “Operation Barbarossa”

“Freed has done so much to illuminate the ins and out of German politics in the late tweflth century, ensuring that his book will be a constant point of reference for scholars.”—David Abulafia, History Today

Frederick Barbarossa, born of two of Germany’s most powerful families, swept to the imperial throne in a coup d’état in 1152. A leading monarch of the Middle Ages, he legalized the dualism between the crown and the princes that endured until the end of the Holy Roman Empire.

This new biography, the first in English in four decades, paints a rich picture of a consummate diplomat and effective warrior. John Freed mines Barbarossa’s recently published charters and other sources to illuminate the monarch’s remarkable ability to rule an empire that stretched from the Baltic to Rome, and from France to Poland. Offering a fresh assessment of the role of Barbarossa’s extensive familial network in his success, the author also considers the impact of Frederick’s death in the Third Crusade as the key to his lasting heroic reputation. In an intriguing epilogue, Freed explains how Hitler’s audacious attack on the Soviet Union in 1941 came to be called “Operation Barbarossa.”

Praise For Frederick Barbarossa: The Prince and the Myth…

“John Freed’s biography is the first in English for half a century. A 700-page doorstopper, this impressive, learned book certainly makes amends for this previously serious oversight… Thanks to Freed’s scholarly but highly readable biography, this pragmatic Teutonic Arthur might finally gain greater renown beyond Germany.”—Sean McGlynn, Spectator
— Sean McGlynn

“Freed’s book is certainly a cause for celebration and will be a lasting resource… gives us a compelling, readable and very well-informed narrative of Frederick’s thirty-eight reign, that made him —with Henry II of England, Louis VII of France and Manuel I of Byzantium — one of the leading political personalities of Europe.”—Mark Whittow, TLS
— Mark Whittow

“Freed has done so much to illuminate the ins and out of German politics in the late 12th century, ensuring that his book will be a constant point of reference for scholars.”—David Abulafia, History Today
— David Abulafia

John Freed is distinguished professor of history emeritus, Illinois State University, and the author of four previous books. He lives in Bloomington, IL.
Loading...
or
Not Currently Available for Direct Purchase