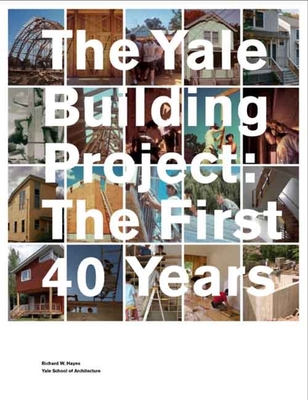 Conceived by architect Charles W. Moore and begun in the context of social activism and dramatic institutional change during the 1960s, the Yale Building Project has contributed to the education of many of this country’s leading architects, serving as the model for “design-build” programs at universities nationwide. The Yale Building Project: The First 40 Years is the first comprehensive history of this important initiative.
Every year since 1967, graduate students in the Yale School of Architecture have designed and constructed a building for a community–based client. This book documents each of the projects alongside essays that situate the program in its historical context, from students’ journeys to rural Appalachia to build community centers and a health clinic, to pavilions and recreational structures constructed throughout Connecticut, and affordable housing built in New Haven. Describing a program that has had a profound effect on American architectural culture, this book will serve as a valuable resource for architects, historians, students, and community planners.

Richard W. Hayes is an architect and architectural historian. Robert A. M. Stern is Dean and J.M. Hoppin Professor of Architecture at the Yale School of Architecture.
Loading...
or
Not Currently Available for Direct Purchase