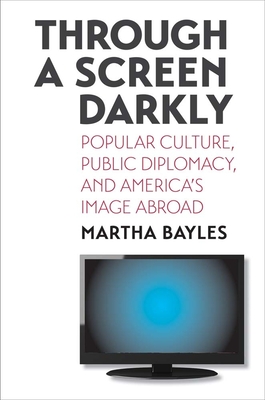 Through a Screen Darkly

What does the world admire most about America? Science, technology, higher education, consumer goods—but not, it seems, freedom and democracy. Indeed, these ideals are in global retreat, for reasons ranging from ill-conceived foreign policy to the financial crisis and the sophisticated propaganda of modern authoritarians. Another reason, explored for the first time in this pathbreaking book, is the distorted picture of freedom and democracy found in America's cultural exports.

In interviews with thoughtful observers in eleven countries, Martha Bayles heard many objections to the violence and vulgarity pervading today's popular culture. But she also heard a deeper complaint: namely, that America no longer shares the best of itself. Tracing this change to the end of the Cold War, Bayles shows how public diplomacy was scaled back, and in-your-face entertainment became America's de facto ambassador.

This book focuses on the present and recent past, but its perspective is deeply rooted in American history, culture, religion, and political thought. At its heart is an affirmation of a certain ethos—of hope for human freedom tempered with prudence about human nature—that is truly the aspect of America most admired by others. And its author’s purpose is less to find fault than to help chart a positive path for the future.

“Bayles points to the elephant in the room that is ignored in all other discussions of public diplomacy in general and cultural diplomacy in particular: the overwhelming role of commercial mass culture. I know of no other book that shows its lopsided influence, for good or ill. An extremely intelligent mix of reporting, analysis, and policy prescription.”—Robert Asahina, author of Just Americans: How Japanese Americans Won a War at Home and Abroad
— Robert Asahina

“This is a very good book—informative, witty, and thought-provoking. Noting that America’s image abroad has been driven by American popular culture since the end of the Cold War, often with adverse results, Bayles advocates compellingly for a revival of ‘public diplomacy.’ She concludes with a set of very hands-on recommendations on how to achieve this.”—Peter L. Berger, Boston University
— Peter L. Berger

“Martha Bayles takes a tough, piercing and very thoughtful look at how Americans and our culture are perceived and often misunderstood in the increasingly connected global community. She demonstrates how critical it is that our government return to vigorous public diplomacy to showcase the best of America—our deep commitment to democracy, freedom and human rights and the innate optimism and hope that is at the core of our culture.”—Nicholas Burns, Harvard University and former Under Secretary of State
— Nicholas Burns

“Martha Bayles, one of America's most astute cultural critics, demonstrates in Through a Screen Darkly how the vulgarization of American popular culture has distorted the image of the United States for millions of people around the world, even as Washington has let its capacity for ‘public diplomacy’ decay. It is a lively but sobering read for anyone concerned with America's place in the world.”—Francis Fukuyama, author ofThe Origins of Political Order
— Francis Fukuyama

“Through a Screen Darkly is a vivid study of the decline of American popular culture and the difficulties it has produced for us worldwide. Analyzing the public diplomacy of the Cold-War and post-Cold-War period, Martha Bayles has produced an absorbing account of the challenges stemming from our present polarization.”—Abbot Gleason, Keeney Professor of History, Emeritus, Brown University
— Abbot Gleason

“Public Diplomacy is the weakest aspect of US engagement with the rest of the world. Martha Bayles here offers a well-researched explanation of why Americans are the worst propagandists in the world. This valuable book should help the American public as well as foreign policy establishment understand their country's global image problem.”—Husain Haqqani, former Ambassador of Pakistan to the United States
— Husain Haqqani

"This is a brisk, how-policy-has-gone-wrong-and-what-to-do-about-it book, which conceals in its pages something more: a brilliant and courageous meditation on the difficulty of communication between modern and traditional societies."—Sam Schulman, Weekly Standard
— Sam Schulman

"An author who knows her stuff and applies it level-headedly is a rare delight nowadays. Martha Bayles, in exploring how America projects its image, both favorably and unfavorably, reaches not only into the detailed modern history of American foreign relations but also into broad cultural matters, and she has a knack for prodding honestly against the weak spots."—Sarah Ruden, Books and Culture
— Sarah Ruden

"The value of this book . . . stems from its mix of insights into the marketing behemoth that is the entertainment industry, combined with careful compilation of provocative anecdotes from those on the receiving end of Hollywood’s finished products. Bayles’ work makes plain the size of the challenge to America’s public diplomats and offers fresh evidence of the damage that results when correctives to skewed images of the United States are lacking overseas."—Emily T. Metzgar, Center on Public Diplomacy Blog
— Emily T. Metzgar

"As Bayles shows in her timely book, the decline of America’s public diplomacy efforts and institutions—which once vigorously promoted our strongest civic and political ideals—means that popular culture exports are now the main shapers of our image abroad. And when not glorifying violence, crime, or casual sex, most of these exports depict a people largely cut off from sustaining ties with family or community, completely absorbed in preening narcissim and seflish consumerism . . . Needless to say, the picture inspires neither emulation nor respect."—Jay Tolson, Hedgehog Review
— Jay Tolson

"This is a wonderful, wonderful book. It is very much more than even its title and subtitle suggest. And it’s a great read. . ."—Kenneth D.M. Jensen, Naval War College Review

Martha Bayles is the author of Hole in Our Soul: The Loss of Beauty and Meaning in American Popular Music. Her reviews and essays on the arts, media, and cultural policy have appeared in the Wall Street Journal, New York Times, Boston Globe, Weekly Standard, and many other publications. She teaches humanities at Boston College.
Loading...
or
Not Currently Available for Direct Purchase