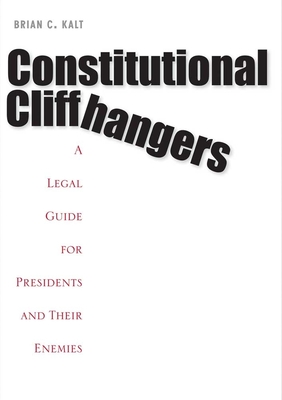 A Legal Guide for Presidents and Their Enemies

The United States Constitution's provisions for selecting, replacing, and punishing presidents contain serious weaknesses that could lead to constitutional controversies. In this compelling and fascinating book, Brian Kalt envisions six such controversies, such as the criminal prosecution of a sitting president, a two-term president's attempt to stay in power, the ousting of an allegedly disabled president, and more. None of these things has ever occurred, but in recent years many of them almost have.

Besides being individually dramatic, these controversies provide an opportunity to think about how constitutional procedures can best be designed, interpreted, and repaired. Also, because the events Kalt describes would all carry enormous political consequences, they shed light on the delicate and complicated balance between law and politics in American government.


Praise For Constitutional Cliffhangers: A Legal Guide for Presidents and Their Enemies…

"Brian Kalt's Constitutional Cliffhangers is full of insights into constitutional interpretation, a lively topic of concern among both scholars and the public more generally. Without in the least diminishing its scholarly contribution, the book is also playfully written, so that it is a delight to read."—Robert William Bennett, Northwestern University
— Robert William Bennett

"Brian Kalt is an evil genius when it comes to conjuring up potential national political crises and clearly explaining the legal and constitutional ramifications even for non-lawyers like me. The What-If scenarios make your scalp twitch. I recommend this book highly to wonks, wonkettes, and laymen who are interested in our brilliant but sometimes flawed political system."—C.J. Box, New York Times best-selling author of Back of Beyond and Force of Nature
— C.J. Box

"Brian Kalt has identified unresolved constitutional questions that could easily lead to chaos and crisis. He is at his best when he writes the script that puts us into the quagmire. I hope that what he writes about never happens, but it has happened before and it will happen again. For a White House Counsel, Constitutional Cliffhangers is nothing but nightmare-and great fun nonetheless."—Gregory B. Craig, former White House Counsel

Brian C. Kalt is professor of law at Michigan State University.
Loading...
or
Not Currently Available for Direct Purchase