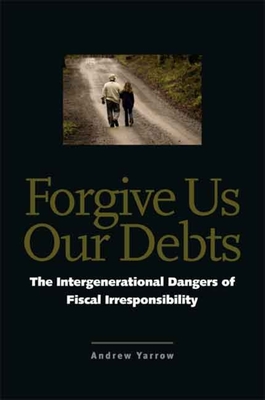 Forgive Us Our Debts

The Intergenerational Dangers of Fiscal Irresponsibility

In this immensely timely book, Andrew Yarrow brings the sometimes eye-glazing discussion of national debt down to earth, explaining in accessible terms why federal debt is rising (and will soon rise much faster), what effects it may have on Americans if debt is not brought under control, why our government borrows, and what it will take to pay it all back.

The picture Yarrow paints should concern all Americans. Specifically, he brings to light how rising Medicare, Social Security, and other spending on one hand, and insufficient government revenues on the other, make a mockery of fiscal responsibility. Deficits and debt, Yarrow asserts, are crowding out spending on needed investments in science, environment, infrastructure, and other domestic discretionary programs and could severely harm our nation’s and our citizens’ future. But he makes clear that this does not have to be a doomsday scenario. If we act in a bipartisan fashion to restore fiscal health, our legacy to the next generation can be much more than trillions of dollars of IOUs.


Praise For Forgive Us Our Debts: The Intergenerational Dangers of Fiscal Irresponsibility…

“Andrew Yarrow blends his skills as a journalist, historian, and policy insider to address issues absolutely critical to our future and that of our children. Don’t just read it; make sure your neighbor does, as well.”—Dr. C. Eugene Steuerle, co-director, Urban Institute–Brookings Institution Tax Policy Center, and former deputy assistant secretary of the Treasury under President Reagan

"There's good debt and bad debt. Either can be handled responsibly or left for others to worry about. God grant us the wisdom to recognize the difference and to do the right thing. Meanwhile, read Andrew Yarrow's uniquely clear-eyed look at the issue."—Jared Bernstein, Director of the Living Standards Program, Economic Policy Institute

"Andrew Yarrow's Forgive Us Our Debts should be mandatory reading for everyone who cares about America's future economic health. Andrew's concise, clearly written prose explains why deficits really do matter, for all of us, and for our children and grandchildren.”—Charles Kolb, President, The Committee for Economic Development

Andrew L. Yarrow is vice president and Washington director of Public Agenda, and teaches modern U.S. history at American University. A longtime former reporter for the New York Times, Dr. Yarrow has published extensively during the last 25 years, including Latecomers: Children of Parents Over 35, frequent op-eds, and many popular and scholarly articles.