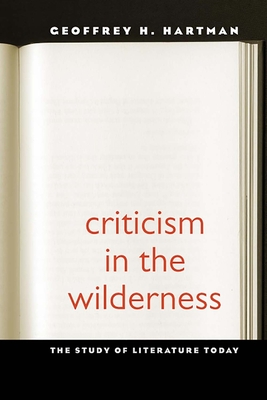 Criticism in the Wilderness

Originally published in 1980, this now classic work of literary theory explores the wilderness of positions that grew out of the collision between Anglo-American practical criticism and Continental philosophic criticism. This second edition includes a new preface by the author as well as a foreword by Hayden White.
“A key text for understanding ‘the fate of reading’ in the Anglophone world over the last fifty years.”—Hayden White, from the Foreword
“Criticism in the Wilderness may be the best, most brilliant, most broadly useful book yet written by an American about the sudden swerve from the safety of established decorum toward bravely theoretical, mainly European forms of literary criticism.”—Terrence Des Pres, Nation
“A polemical survey that reaffirms the value of the Continental tradition of philosophical literary criticism.”—Notable Books of the Year, New York Times Book Review

Geoffrey Hartman is Sterling Professor Emeritus of English and Comparative Literature at Yale University. The Geoffrey Hartman Reader, co-edited by Hartman and Daniel T. O'Hara, is the recipient of the 2006 Truman Capote Award for Literary Criticism in Memory of Newton Arvin.
Loading...
or
Not Currently Available for Direct Purchase