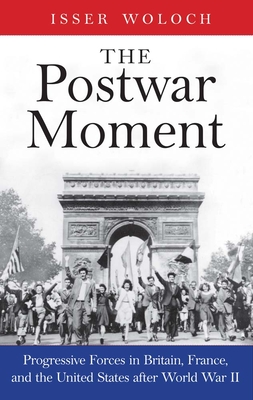 Progressive Forces in Britain, France, and the United States after World War II

An incisive, comparative study of the development of Post–World War II progressive politics in Britain, France, and the United States

Toward the end of World War II, the three democracies faced a common choice: return to the civic order of prewar normalcy or embark instead on a path of progressive transformation. In this ambitious and original work, Isser Woloch assesses the progressive agendas that crystallized in each of the allied democracies: their roots in the interwar decades, their development during wartime, the struggles to enact them in the early postwar years, and the mixed outcomes in each country.

Praise For The Postwar Moment: Progressive Forces in Britain, France, and the United States after World War II…


“For decades when it was unpopular to do so for both leftists and liberals alike, Isser Woloch preserved a social democratic interpretation of the French Revolution and its implications for modern history. Today the heritage of that tradition in the middle of the twentieth century seems more relevant than ever, and we are fortunate in the extreme that Woloch’s newest magisterial book reconstructs a progressive moment after World War II in three countries with such finesse and novelty.”— Samuel Moyn, author of Not Enough: Human Rights in an Unequal World

"Written with analytical verve, The Postwar Moment combines unflinching scrutiny with narrative power.  From the riveting opening through its rich national histories and bracing comparative conclusion, this absorbing work reshapes how we understand the fate of progressive and democratic ambitions."—Ira Katznelson, author of Fear Itself: The New Deal and the origins of Our Time

"In this brilliant synthesis, Isser Woloch fulfills the promise of comparative history by illuminating both the similarities and the differences in the way British, French, and American progressives responded to the challenges of the postwar era."—James J. Sheehan, author of Where Have All the Soldiers Gone? The Transformation of Modern Europe

Isser Woloch is the Moore Collegiate Professor Emeritus of History at Columbia University. He is the author of numerous books including The New Regime: Transformations of the French Civic Order, 1789–1820s; Jacobin Legacy: The Democratic Movement under the Directory; and Napoleon and His Collaborators: The Making of a Dictatorship.
Loading...
or
Not Currently Available for Direct Purchase