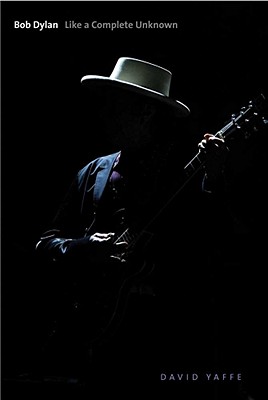 Bob Dylan is an iconic figure in American musical and cultural history, lauded by "Time" magazine as one of the hundred most important people of the twentieth century. For nearly fifty years the singer-songwriter has crafted his unique brand of music, from his 1962 self-titled debut album to 2009's #1 hit "Together Through Life," appealing to everyone from baby boomers to the twenty-somethings who storm the stage at his concerts.

In "Bob Dylan: Like a Complete Unknown," literary scholar and music critic David Yaffe considers Dylan from four perspectives: his complicated relationship to blackness (including his involvement in the civil rights movement and a secret marriage with a black backup singer), the underrated influence of his singing style, his fascinating image in films, and his controversial songwriting methods that have led to charges of plagiarism. Each chapter travels from the 1960s to the present, offering a historical perspective on the many facets of Dylan's life and career, exploring the mystery that surrounds the enigmatic singer and revealing the complete unknown Dylan.

David Yaffe is assistant professor of English at Syracuse University and a music critic for the "Nation." He is the author of "Fascinating Rhythm: Reading Jazz in American Writing" and "Reckless Daughter: A Portrait of Joni Mitchell"

"Writing with deep respect and affection for his subject, David Yaffe gives us an exhilarating tour of Bob Dylan''s astonishing career. This book sings."—Brian Morton, author of Starting Out in the Evening

"With a keen ear for Dylan''s musical influences, vocal changes, and literary borrowings, David Yaffe captures the dramatic twists and turns of Dylan''s creative life, especially his chamelon-like shifts of identity, his protean elusiveness."—Morris Dickstein, author Gates of Eden and Dancing in the Dark
-Morris Dickstein

"Exhilarating reading....One finishes the book not with a diminished, but rather a much augmented and far more nuanced appreciation of Dylan’s lifework....The voice is lively, witty, colloquial, endlessly comfortable....Dylan studies now bulks rather large; Yaffe’s book promises to whip the field into a kind of shape."—Kevin J. H. Dettmar, Pomona College, editor of The Cambridge Companion to Bob Dylan

"Steeped but not drowned in cultural studies, David Yaffe offers fresh and sometimes prickly insight about Bob Dylan''s art. Yaffe reads closely and listens hard, and his book will have you saying, ''aha!'' again and again."—Sean Wilentz, Sidney and Ruth Lapidus Professor of History, Princeton University, and author of Bob Dylan in America

"David Yaffe is to Bob Dylan what Andrew Delbanco is to Herman Melville and what Farah Jasmine Griffin is to Billie Holiday—a writer whose authority is so vast and whose thinking is so fresh that he makes reading about his long-familiar subject an act of discovery."—David Hajdu, Columbia University; author of Positively 4th Street
-David Hajdu

“…fascinating for obsessives who think they know everything and want to know more.”   — Kirkus Reviews

". . . based on the depth and breadth of his knowledge exhibited in this book, [Yaffe] must actually be a full-time Dylanologist.”—Minneapolis Star Tribune

“Yaffe] takes some risks a more established Bob scholar might shy away from . . . and for such fearlessness – and for keeping it all to the point – [he] deserves our gratitude.”—The Montreal Gazette