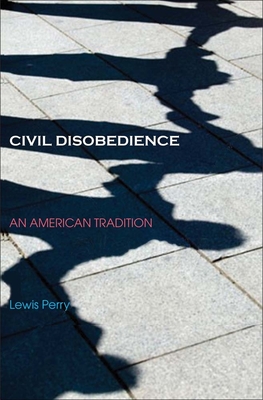 The distinctive American tradition of civil disobedience stretches back to pre-Revolutionary War days and has served the purposes of determined protesters ever since. This stimulating book examines the causes that have inspired civil disobedience, the justifications used to defend it, disagreements among its practitioners, and the controversies it has aroused at every turn.

Tracing the origins of the notion of civil disobedience to eighteenth-century evangelicalism and republicanism, Lewis Perry discusses how the tradition took shape in the actions of black and white abolitionists and antiwar protesters in the decades leading to the Civil War, then found new expression in post–Civil War campaigns for women’s equality, temperance, and labor reform. Gaining new strength and clarity from explorations of Thoreau’s essays and Gandhi’s teachings, the tradition persisted through World War II, grew stronger during the decades of civil rights protest and antiwar struggles, and has been adopted more recently by anti-abortion groups, advocates of same-sex marriage, opponents of nuclear power, and many others. Perry clarifies some of the central implications of civil disobedience that have become blurred in recent times—nonviolence, respect for law, commitment to democratic processes—and throughout the book highlights the dilemmas faced by those who choose to violate laws in the name of a higher morality.

"Lewis Perry deepens, clarifies, and illuminates the history of American civil disobedience in ways that only he can. He writes with exceptional grace and lucidity about the tradition's ambiguities and ongoing debates. This book is a stunning success."—Howard Brick, University of Michigan
— Howard Brick

“From the Boston Tea Party to Occupy Wall Street, the practice—and theory—of civil disobedience has been an integral, renewing feature of American political culture. In this heartening, wonderfully informative and moving account, Lewis Perry shows how the tradition of civil disobedience has enduringly reconciled social and spiritual radicalism with ideals of citizenship and offered powerful witness against citizenship curtailed.”—James Fisher, author of On the Irish Waterfront: The Crusader, the Movie, and the Soul of the Port of New York
— James Fisher

“Lewis Perry has written a magisterial overview of an American tradition of civil disobedience. For anyone who wishes to understand what is, or is not, traditional about the sit-down strikes of the 1930s, the sit-ins of the civil rights movement, campus protests of the 1960s, the tactics of Operation Rescue, and the explosion of the Tea Party, Lewis Perry’s book is as indispensable as it is eloquent.”—Tony Badger, Cambridge University
— Tony Badger

“The phenomenon of dissent eventually upending national consensus is one of the lessons remembered as Lewis Perry's engrossing book follows the tradition of speaking truth to power from early 18th-century Presbyterian divines jailed for defending Cherokees to Martin Luther King's magisterial justification of civil disobedience in Birmingham jail. The other lesson is that Lewis Perry's protagonists were willing to be jailed for their principles.”—David Levering Lewis, author of Martin Luther King, Jr.: A Biography
— David Levering Lewis

“Civil Disobedience offers a fascinating, richly descriptive history of great relevance to anyone concerned with American democratic traditions. Analytic and careful, Perry distinguishes civil disobedience from other forms of collective action, traces its origins in religious conviction and rights claims, points to its uses both on behalf of others and for one’s own causes. A masterful book.”—Linda Gordon, New York University
— Linda Gordon

“Exploring its moral paradoxes and practical complexities in rich and often riveting detail, Lewis Perry rescues the tradition of civil disobedience from the simplistic pieties to which it is often reduced and demonstrates its integral role throughout American history.”—Eric J. Sundquist, author of King's Dream: The Legacy of Martin Luther King's "I Have a Dream" Speech
— Eric J. Sundquist

"Perry highlights the stories of some famous disobedients...but the charm of this treatment lies in the tales of lesser-known practitioners: the missionaries who opposed the removal of Georgia's Cherokees, black abolitionists who worked for the extirpation of slavery, the elderly Connecticut sisters who, denied the right to vote, refused to pay their taxes, the Vanderbilt divinity school student expelled for his part in lunch counter sit-ins....Perry brings a calm eye to this not-so-genteel topic, where the encounters between opposing forces have oftentimes been anything but civil. An agreeable mix of scholarly explanation and good storytelling."—Kirkus Reviews
— Kirkus Reviews

"Civil Disobedience is the first history of this unruly concept to span the nation's entire existence, and Mr. Perry has written it with warmth and scholarly care."—Barton Swaim, Wall Street Journal
— Barton Swaim

"Perry excels when he explores those confrontations that have evaded historians for far too long. His first chapter details the case of Samuel Worcester, a missionary  sent to 'civilize' the Cherokee and later arrested resisting their removal. Perry then restores the forgotten agency of black abolitionists, who straddled the line between obedience in striving for citizenship and disobedience in resisting slavery. . . . There is much to recommend in Perry’s scholarship, especially for active practitioners of nonviolent direct action." —Philip Wight, Waging Nonviolence
— Philip Wight
or
Not Currently Available for Direct Purchase
Copyright © 2020 American Booksellers Association