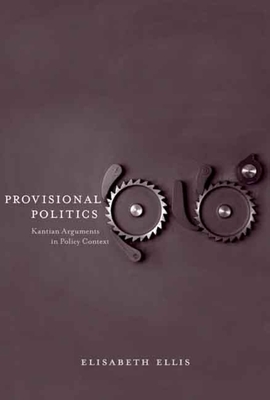 If we are to vindicate moral reasoning in politics, Elisabeth Ellis argues in this original and provocative work, we must focus on the conditions of political discourse rather than the contents of any particular ethical system. Written in an engaging, direct style, Provisional Politics builds on Ellis’s prize-winning interpretation of Kant’s theory of provisional right to construct a new theory of justice under conditions of agency and plurality. She develops this new perspective through a series of cases ranging from the treatment of AIDS widows in Kenya to the rights of non-citizens everywhere, as well as the clash between democratic decision-making and the politics of species conservation. The book concludes with a sobering discussion of the probable limits of political agency.

“This is the most original use of Kantian ideas and insights by a theorist of contemporary politics since John Rawls. It builds sensibly, intelligently, even beautifully, on Ellis's prize-winning historical study of Kant’s political theory, and it establishes her as one of the leaders of the rising generation of political theorists.”­—Ian Shapiro, author of The Moral Foundations of Politics and Democratic Justice
— Ian Shapiro