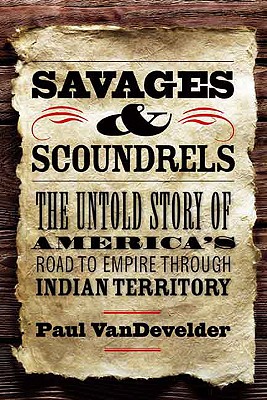 The Untold Story of America's Road to Empire Through Indian Territory

What really happened in the early days of our nation? How was it possible for white settlers to march across the entire continent, inexorably claiming Native American lands for themselves? Who made it happen, and why? This gripping book tells America's story from a new perspective, chronicling the adventures of our forefathers and showing how a legacy of repeated betrayals became the bedrock on which the republic was built.Paul VanDevelder takes as his focal point the epic federal treaty ratified in 1851 at Horse Creek, formally recognizing perpetual ownership by a dozen Native American tribes of 1.1 million square miles of the American West. The astonishing and shameful story of this broken treaty one of 371 Indian treaties signed during the eighteenth and nineteenth centuries reveals a pattern of fraudulent government behavior thatagain and again displaced Native Americans from their lands. VanDevelder describes the path that led to the genocide of the American Indian; those who participated in it, from cowboys and common folk to aristocrats and presidents; and how the history of the immoral treatment of Indians through the twentieth century has profound social, economic, and political implications for America even today.

Praise For Savages and Scoundrels: The Untold Story of America's Road to Empire Through Indian Territory…

". . . . [A] riveting, often chilling account of how a young, land-hungry nation . . . invent[ed] the laws and policies that enabled it to push aside a people who . . . held legal ownership of millions of square miles of ancestral land."— Marc Covert, The Oregonian
-Marc Covert

"Paul VanDevelder has written a lively and fast-paced account of some of the major examples of the United States'' acquisition of American Indian lands and assets."--Robert J. Miller, Great Plains Quarterly
-Robert J. Miller

“This is a powerful story composed of careful scholarship, great adventure, and compassion. It is written like the wind, a macroscopic overview of manifest destiny with a vibrant cast of thousands. It is one of the best books I have ever read about our national tragedy.”—John Nichols, author of The Milagro Beanfield War

"Savages and Scoundrels tells a deeply saddening American story, detailing the long history of the European take-over and unscrupulous exploitation of Native American homelands. Let’s hope that this exceptionally meaningful and useful account finds a responsive audience among the citizens who deal with tribal, religious and ethic complexities and conflicts anywhere around the world."—William Kittredge, author of Hole in the Sky

Praise for Paul VanDevelder’s Coyote Warrior:
“Intense, heroic, patriotic, heartbreaking, uplifting, wise, and instructive, Coyote Warrior is a major work of history….It is our country’s story, and it is our responsibility to know it. I’m grateful to Paul VanDevelder for telling it.”—Rick Bass, author of Winter

"VanDevelder''s research on this relatively unknown story of federal-Indian relations is impeccable and infused with a humanizing of what has elsewhere been treated as merely a footnote in history."—Kurt Peters, Oregon State University

"A fast moving drama about the rapacious development of American treaty policy toward the indigenous Indian tribes…compelling and highly relevant."—Greg Munro, University of Montana School of Law
-Greg Munro

"VanDevelder promises to "recontextualize and realign some of the major themes in America''s story that have been mythologized and embroidered in many of our familiar, widely read and widely taught histories." It''s a promise he keeps. Savages and Scoundrels is a riveting, often chilling account of how a young, land-hungry nation went about inventing the laws and policies that enabled it to push aside a people who, by its own admission and landmark court decisions, held legal ownership of millions of square miles of ancestral land."—Marc Covert, The Oregonian

Paul VanDevelder is a journalist and author. His book "Coyote Warrior: One Man, Three Tribes, and the Trial That Forged a Nation" was nominated for the Pulitzer Prize, the National Book Award, and the American Bar Association's Silver Gavel Award. He lives in the Pacific Northwest.
Loading...
or
Not Currently Available for Direct Purchase