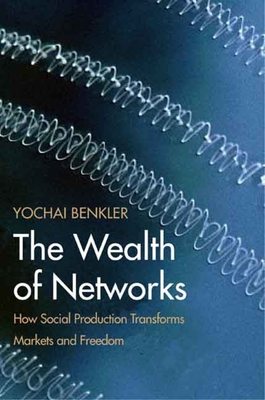 The Wealth of Networks (Paperback)

With the radical changes in information production that the Internet has introduced, we stand at an important moment of transition, says Yochai Benkler in this thought-provoking book. The phenomenon he describes as social production is reshaping markets, while at the same time offering new opportunities to enhance individual freedom, cultural diversity, political discourse, and justice. But these results are by no means inevitable: a systematic campaign to protect the entrenched industrial information economy of the last century threatens the promise of today’s emerging networked information environment.

In this comprehensive social theory of the Internet and the networked information economy, Benkler describes how patterns of information, knowledge, and cultural production are changing—and shows that the way information and knowledge are made available can either limit or enlarge the ways people can create and express themselves. He describes the range of legal and policy choices that confront us and maintains that there is much to be gained—or lost—by the decisions we make today.

Praise For The Wealth of Networks: How Social Production Transforms Markets and Freedom…

"[An] ambitious attempt to understand how the internet is changing society. . . . The book draws on a staggering array of disciplines: from graph theory to economics, law to political science. But Benkler’s breadth is not at the expense of depth. . . . He never falls for easy, superficial conclusions. His writing is clear and readable . . . Keeping it as light as he does is a remarkable feat for a heavyweight piece of work. . . . This is an important book."—Paul Miller, Financial Times Magazine
"New networks offer a glimpse of the new polity and the ancient regime is struggling to prevent its birth. The Wealth of Networks is a reveille for netizens. . . . [It] is about the ‘transformation of the information and cultural production sector.’ Few are unaware that this sector is undergoing transformation, and Benkler’s identification of major forces at work is important and enlightening."—Paul Duguid, Times Literary Supplement
"Benkler excels . . . in bringing together disparate strands of the new information economy, from the democratization of the newsmedia via blogs to the online effort publicizing weaknesses in Diebold voting machines. . . . His defense of the Internet's power to enrich people's lives is often stirring."—Publishers Weekly
"The Wealth of Networks details the emergence of a networked society that if allowed to flourish will produce more value than does a proprietary system. . . . This book deserves to be read beyond the scope of the few scholars interested in intellectual property issues."—Debora Halbert, The Law and Politics Book Review

"The Wealth of Networks is Internet utopianism for grown-ups. Benkler’s sprawling argument sums up years of work on the economics, sociology, and politics of information technology. He is interested in the world that exists mostly for what it shows about what might be—a charitable definition of the utopian temper. His book is one part introduction to a vast and rapidly growing field of technology, economics, and law, and one part an object lesson in the place of utopian hopes in mature liberal thought. Benkler makes a strong case that we disown utopianism at our peril. In making that argument, he develops a liberal and realistic version of utopian thinking that avoids some of the hazards of the approach."—Jedediah Purdy, American Prospect

"Professor Benkler’s manifesto turns a much-needed spotlight on issues of great scope and moment that deserve far more public attention than they’ve yet gotten. For that reason, we’ve chosen Strategy & Business as the best book about the future in 2006."—Howard Rheingold, The Wealth of Networks (Best Books '06)

"A tour de force argument. . . . Benkler argues that now is the time to consider the balance between the promise of technology and the threats to its full measure. His is a book that gets behind (or beyond) current policy specifics to engage the basic issues involved. Important reading."—Communication Booknotes Quarterly
"Erudite, passionate, and economically sophisticated, Professor Benkler's new book is required reading for anyone interested in the democratic (and not-so-democratic) vistas of the Internet age."—Harvard Law Review
Winner of the 2006 Donald McGannon Award for Social and Ethical Relevance in Communications Policy Research given by the Donald McGannon Communication Research Center at Fordham University, New York
Selected as a 2007 AAUP University Press Book for Public and Secondary School Libraries
Winner of the American Political Science Association's 2007 Don K. Price Award for the Best Book in Science and Technology Politics
Winner of the 2008 CITASA Book Award, given by the American Sociological Association section on Communication and Information Technologies

"In this book, Benkler establishes himself as the leading intellectual of the information age. Profoundly rich in its insight and truth, this work will be the central text for understanding how networks have changed how we understand the world. No work to date has more carefully or convincingly made the case for a fundamental change in how we understand the economy of society."—Lawrence Lessig, Professor of Law, Stanford Law School

"A lucid, powerful, and optimistic account of a revolution in the making."—Siva Vaidhyanathan, author of The Anarchist in the Library

"This deeply researched book documents the fundamental changes in the ways in which we produce and share ideas, information, and entertainment. Then, drawing widely on the literatures of philosophy, economics, and political theory, it shows why these changes should be welcomed, not resisted.  The trends examined, if allowed to continue, will radically alter our lives—and no other scholar describes them so clearly or champions them more effectively than Benkler."—William W. Fisher III, Hale and Dorr Professor of Intellectual Property Law, Harvard University, Director, Berkman Center for Internet and Society

"At last a book that confronts the politics and economics of the Internet in a fundamental way, moving beyond the surface of policy debate to reveal the basic structure of the challenges we confront."—Bruce Ackerman, Sterling Professor of Law and Political Science, Yale University

"A magnificent achievement. Yochai Benkler shows us how the Internet enables new commons-based methods for producing goods, remaking culture, and participating in public life. The Wealth of Networks is an indispensable guide to the political economy of our digitally networked world."—Jack M. Balkin, Professor of Law and Director of the Information Society Project, Yale University