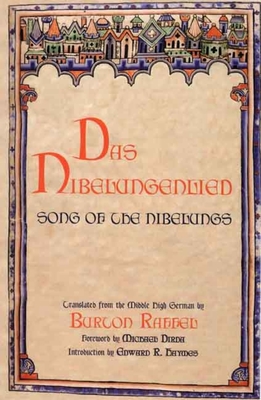 Song of the Nibelungs

A new verse translation of the great German epic poem that inspired Wagner’s Ring Cycle and J. R. R. Tolkien’s The Lord of the Rings

No poem in German literature is so well known and studied in Germany and Europe as the 800-year-old Das Nibelungenlied. In the English-speaking world, however, the poem has remained little known, languishing without an adequate translation. This wonderful new translation by eminent translator Burton Raffel brings the epic poem to life in English for the first time, rendering it in verse that does full justice to the original High Middle German. His translation underscores the formal aspects of the poem and preserves its haunting beauty. Often called the German lliad, Das Nibelungenlied is a heroic epic both national in character and sweeping in scope. The poem moves inexorably from romance through tragedy to holocaust. It portrays the existential struggles and downfall of an entire people, the Burgundians, in a military conflict with the Huns and their king. In his foreword to the book, Michael Dirda observes that the story “could be easily updated to describe the downfall of a Mafia crime family, something like The Godfather, with swords.” The tremendous appeal of Das Nibelungenlied throughout the nineteenth and twentieth centuries is reflected in such works as Richard Wagner’s opera tetralogy Der Ring des Nibelungen, Fritz Lang’s two-part film Die Nibelungen, and, more recently, J. R. R. Tolkien’s The Lord of the Rings.

Burton Raffel is Distinguished Professor of Arts and Humanities Emeritus and professor of English emeritus, University of Louisiana at Lafayette. He lives in Lafayette. His many works of translation include Voltaire’s Candide, the narrative poems of Chrétien de Troyes, and Poems and Prose from the Old English, all published by Yale University Press.