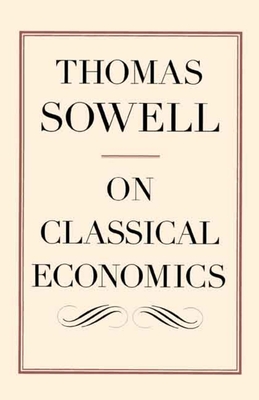 A reexamination of classical economic theory and methods, by a senior economist of international stature

Thomas Sowell's many writings on the history of economic thought have appeared in a number of scholarly journals and books, and these writings have been praised, reprinted, and translated in various countries around the world. The classical era in the history of economics is an important part of the history of ideas in general, and its implications reach beyond the bounds of the economics profession.  On Classical Economics is a book from which students can learn both history and economics. It is not simply a Cook's tour of colorful personalities of the past but a study of how certain economic concepts and tools of analysis arose, and how their implications were revealed during the controversies that followed. In addition to a general understanding of classical macroeconomics and microeconomics, this book offers special insight into the neglected pioneering work of Sismondi—and why it was neglected—and a detailed look at John Stuart Mill's enigmatic role in the development of economics and the mysteries of Marxian economics. Clear, engaging, and very readable, without being either cute or condescending, On Classical Economics can enable a course on the history of economic thought to make a contribution to students’ understanding of economics in general--whether in price theory, monetary theory, or international trade.  In short, it is a book about analysis as well as history.

Thomas Sowell is a Senior Fellow at the Hoover Institution, Stanford University, and the author of numerous books on a wide range of subjects, including Affirmative Action Around the World, published by Yale University Press.
Loading...
or
Not Currently Available for Direct Purchase