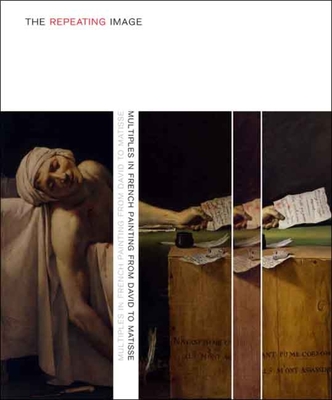 Multiples in French Painting from David to Matisse

Today serial imagery dominates all forms of visual media, from advertising to conceptual sculpture. In this innovative project, the authors show that the phenomenon of repetition appears as a radical element in early modern painting, long before its embrace by 20th-century high modernism. In works by Ingres, Delaroche, Gérôme, Corot, Millet, Monet, Cézanne, Degas, and Matisse, the reader can compare closely related versions of some of the most familiar imagery of the 19th and early 20th centuries. By making multiples of closely related subject matter in their paintings, the authors argue, these painters challenged an aesthetic based on the notion of an inimitable, unique masterpiece. Through beautiful illustrations and essays by leading scholars, this book ultimately shows how the 19th-century invention of photography and film—with their intrinsic attributes of repetition—did not diminish the traditional medium of painting but rather propelled it in new directions.

Eik Kahng is curator of 18th- and 19th-century art at the Walters Art Museum. Stephen Bann is professor of the history of art at the University of Bristol. Simon Kelly is associate curator of European painting and sculpture at the Nelson-Atkins Museum, Kansas City. Richard Shiff is Chair in Art and directs the Center for the Study of Modernism at the University of Texas, Austin. Charles F. Stuckey is a specialist in Impressionist and modern art. Jeffrey Weiss is director of the Dia Art Foundation.