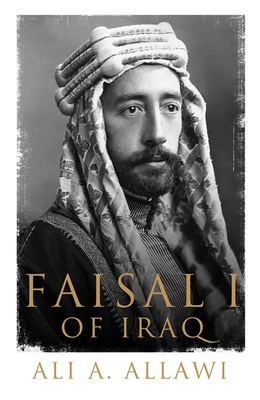 Faisal I of Iraq

The first major biography of the founder of modern Iraq, a charismatic champion of Arab independence and unity

Born in 1883, King Faisal I of Iraq was a seminal figure not only in the founding of the state of Iraq but also in the making of the modern Middle East. In all the tumult leading to the dissolution of the Ottoman Empire and the establishment of new Arab states, Faisal was a central player. His life traversed each of the important political, military, and intellectual developments of his times. This comprehensive biography is the first to provide a fully rounded picture of Faisal the man and Faisal the monarch. Ali A. Allawi recounts the dramatic events of his subject’s life and provides a reassessment of his crucial role in developments in the pre– and post–World War I Middle East and of his lasting but underappreciated influence in the region even 80 years after his death. A battle-hardened military leader who, with the help of Lawrence of Arabia, organized the Arab Revolt against the Ottoman Empire; a leading representative of the Arab cause, alongside Gertrude Bell, at the Paris Peace Conference of 1919; a founding father and king of the first independent state of Syria; the first king of Iraq—in his many roles Faisal overcame innumerable crises and opposing currents while striving to build the structures of a modern state. This book is the first to afford his contributions to Middle East history the attention they deserve.


Praise For Faisal I of Iraq…

"A reverent, stirring life of the Arab nationalist, friend of T.E. Lawrence and first monarch of Iraq. Using a host of lost Arab voices in painting the portrait of Faisal I (1885–1933), the author fills a void in scholarship with this nuanced biography of a seminal figure in the shaping of the modern Middle East . . . A misunderstood sharif finds a worthy, erudite biographer in Allawi."—Kirkus Reviews, Starred Review
— Kirkus Reviews

“Through his skilful use of Arabic as well as British sources, he portrays Faisal as a convincing multi-dimensional figure. . .This is the fullest portrait yet of a fascinating figure who played a significant role in the making of the modern Middle East.”—The Economist
— The Economist

“One of the strengths of Allawi’s book is that it ignores received ideas of imperialism and nationalism and shows the links, as well as conflicts, between them. . .This biography makes a compelling case that Faisal I, a foreign monarch born in the Hejaz, educated in Constantinople, imposed by Britain, was a better rule of Iraq than most Iraqi leaders.”—Philip Mansel, Literary Review
— Philip Mansel

"This tome will hold the interest of both general readers and specialists, and is notable for being the first full-length biography of the monarch written in English."—Publishers Weekly
— Publishers Weekly

Ali A. Allawi is research professor, National University of Singapore. He was appointed Iraq’s first postwar civilian Minister of Defense in 2004 and in 2005 was appointed Minister of Finance. This is his third book. He lives in London and Baghdad.
Loading...
or
Not Currently Available for Direct Purchase