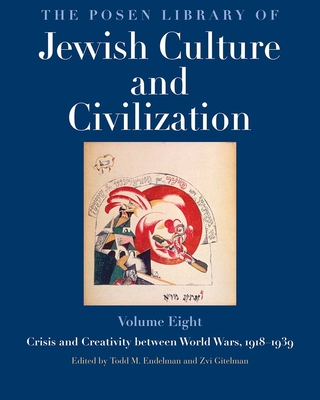 The Posen Library of Jewish Culture and Civilization, Volume 8

The Posen Library's groundbreaking anthology series—called "a feast of Jewish culture, in ten volumes" by the Chronicle of Higher Education—here explores the variety, breadth, and depth of Jewish creativity between the first and second world wars

“A herculean task to assemble such a mighty anthology. This volume argues for the richness and variety in Jewish political, cultural, and aesthetic life.”—Lila Corwin Berman, Temple University

"Readers seeking primary texts, documents, images, and artifacts constituting Jewish culture and civilization will not be disappointed. More important, they might even be inspired. . . . This set will serve to improve teaching and research in Jewish studies at institutions of higher learning and, at the same time, promote, maintain, and improve understanding of the Jewish population and Judaism in general." —Booklist, Starred Review

An anthology of Jewish culture between the world wars, the editors’ selections convey the variety, breadth, and depth of Jewish creativity in those tempestuous decades. Despite—or perhaps because of—external threats, Jews fought vigorously over religion, politics, migration, and their own relation to the state and to one another. The texts, translated from many languages, span a wide range of politics, culture, literature, and art. This collection examines what was simultaneously a tense and innovative period in modern Jewish history.

Praise For The Posen Library of Jewish Culture and Civilization, Volume 8: Crisis and Creativity between World Wars, 1918–1939…

“There are examinations of everything from paganism in the Bible to problematic depictions of Jewish people in the works of famous artists. . . . As stated in the introduction, the preference for this anthology was for longer pieces; although this allows for deeper investigations of dense topics, such as 'Jewish Agricultural Colonization in Old Russia,' it also encompasses works that go in unexpected directions, such as an excerpt from French author Maurice Sachs’ revealing 1960 memoir, Witches’ Sabbath. It is in these in-depth examinations that the book shines; overall, the material may be vast, but its individual components also speak volumes.”—Kirkus Reviews

“An immense but exceedingly insightful look at a period in Jewish culture between the wars.”—Kirkus Reviews

“A herculean task to assemble such a mighty anthology. This volume argues for the richness and variety in Jewish political, cultural, and aesthetic life.”—Lila Corwin Berman, Temple University