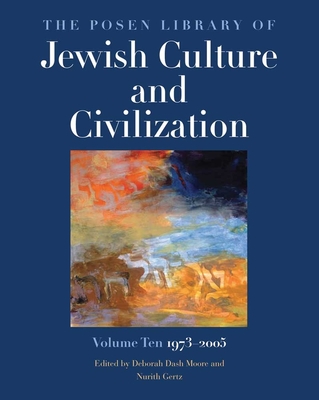 The Posen Library of Jewish Culture and Civilization, Volume 10

The inaugural volume of the Posen Library of Jewish Culture and Civilization, a landmark project to catalogue, preserve, and share Jewish culture and civilization from around the world, from biblical times to the twenty-first century.

A treasury of Jewish creative works from around the world, this volume of the Posen Library of Jewish Culture and Civilization introduces readers to the great diversity of Jewish civilization, covering the momentous period from 1973 to 2005. The full sweep of Jewish culture—high and low, famous and obscure, religious and secular—is gathered here, with hundreds of examples from literature, visual arts, and popular culture, as well as intellectual and spiritual works.

Readers will discover how contemporary Jewish culture was affected by the feminist movement, Israeli politics after the Yom Kippur War, Russian Jewish emigration, the rise of identity politics in the United States, South American revolutions and dictatorships, the Israeli-Palestinian conflict, and much more. This groundbreaking anthology offers a vivid encounter with the myriad expressions of Jewish creativity, reflecting the exuberance, diversity, and vitality of modern Jewish life.

"Readers seeking primary texts, documents, images, and artifacts constituting Jewish culture and civilization will not be disappointed by the wealth of examples in this two-book set."—Booklist, Top Ten Religion Reference Sources
— Booklist

Deborah Dash Moore is Frederick G. L. Huetwell Professor of History and director of the Jean and Samuel Frankel Center for Judaic Studies, University of Michigan. She lives in Ann Arbor, MI. Nurith Gertz is Professor Emerita of Hebrew Literature and Film, The Open University of Israel, and head of the Department of Culture Creation and Production, Sapir College. She lives in Tel Aviv, Israel. James E. Young, editor in chief of the Posen Library of Jewish Culture and Civilization, is professor of English and Judaic studies at the University of Massachusetts, Amherst.