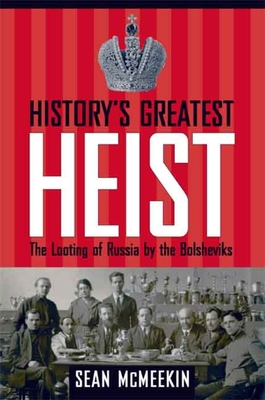 The Looting of Russia by the Bolsheviks

Historians have never resolved a central mystery of the Russian Revolution: How did the Bolsheviks, despite facing a world of enemies and leaving nothing but economic ruin in their path, manage to stay in power through five long years of civil war?  In this penetrating book, Sean McMeekin draws on previously undiscovered materials from the Soviet Ministry of Finance and other European and American archives to expose some of the darkest secrets of Russia’s early days of communism. Building on one archival revelation after another, the author reveals how the Bolsheviks financed their aggression through astonishingly extensive thievery. Their looting included everything from the cash savings of private citizens to gold, silver, diamonds, jewelry, icons, antiques, and artwork.

By tracking illicit Soviet financial transactions across Europe, McMeekin shows how Lenin’s regime accomplished history’s greatest heist between 1917 and 1922 and turned centuries of accumulated wealth into the sinews of class war. McMeekin also names names, introducing for the first time the compliant bankers, lawyers, and middlemen who, for a price, helped the Bolsheviks launder their loot, impoverish Russia, and impose their brutal will on millions.

Sean McMeekin is assistant professor of international relations, Bilkent University, Ankara, Turkey. He is the author of The Red Millionaire: A Political Biography of Willy Münzenberg, Moscow’s Secret Propaganda Tsar in the West, published by Yale University Press. He lives in Ankara.


Praise For History's Greatest Heist: The Looting of Russia by the Bolsheviks…