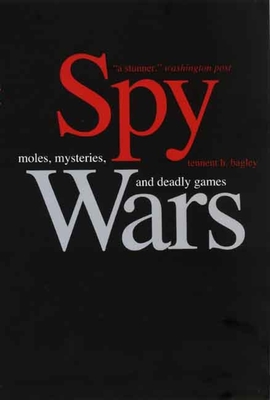 Chosen by William Safire in the New York Times to be the publishing sleeper-seller of the year for 2007
In this rapid-paced book, a former CIA chief of Soviet bloc counterintelligence breaks open the mysterious case of KGB officer Yuri Nosenko’s 1964 defection to the United States. Still a highly controversial chapter in the history of Cold War espionage, the Nosenko affair has inspired debate for more than forty years: was Nosenko a bona fide defector with the real information about Lee Harvey Oswald’s stay in Soviet Russia, or was he a KGB loyalist, engaged in a complex game of deception?
As supervisor of CIA operations against the KGB at the time, Tennent H. Bagley directly handled Nosenko’s case. This insider knowledge, combined with information gleaned from dozens of interviews with former KGB adversaries, places Bagley in a uniquely authoritative position. He guides the reader step by step through the complicated operations surrounding the Nosenko affair and shatters the comfortable version of events the CIA has presented to the public. Bagley unveils not only the KGB’s history of merciless and bloody betrayals but also the existence of undiscovered traitors in the American camp. Shining new light on the CIA-KGB spy wars, he invites deeper thinking about the history of espionage and its implications for the intelligence community today.

Tennent H. (“Pete”) Bagley served twenty-two years in the CIA, handling spies and defectors in Clandestine Services and rising to chief of Soviet bloc counterintelligence. He is now a writer and researcher based in Brussels, Belgium.
Loading...
or
Not Currently Available for Direct Purchase