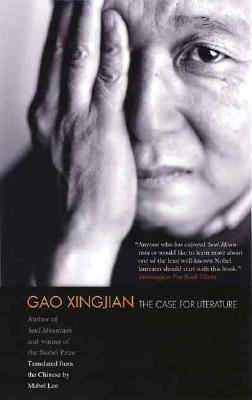 The Case for Literature

The author of Soul Mountain,and China’s only Nobel Laureate in Literature, offers provocative insights into the meaning and enduring importance of literary expression

When Gao Xingjian was crowned Nobel Laureate in 2000, it was the first time in the hundred-year history of the Nobel Prize that this honor had been awarded to an author for a body of work written in Chinese. The same year, American readers embraced Mabel Lee’s translation of Gao’s lyrical and autobiographical novel Soul Mountain, making it a national bestseller. Gao’s plays, novels, and short fiction have won the Chinese expatriate an international following and a place among the world’s greatest living writers. The bold and extraordinary essays in this volume—all beautifully translated by sinologist Mabel Lee—include Gao's Nobel Lecture (“The Case for Literature”), “Literature as Testimony: The Search for Truth,” “Cold Literature,” “Literature and Metaphysics: About Soul Mountain,” and “The Necessity of Loneliness,” as well as other essays. These essays embody an argument for literature as a universal human endeavor rather than one defined and limited by national boundaries. Gao believes in the need for the writer to stand apart from collective movements, regardless of whether these are engineered by political parties or driven by economic or other forces not related to literature. This collectionpresents Gao's innovative ideas on aesthetics, and it constitutes the very kernel of his thinking on literary creation.

Playwright, novelist, essayist, and painter Gao Xingjian ws born in 1940 in Jiangxi Province in eastern China. Choosing exile, he settled in Paris in 1987. In 1992, he was named a Chevalier de l'Ordre des Arts et des Lettres by the French government. In 2000, he was awarded the Nobel Prize in Literature. Mabel Lee’s many translations include Gao Xingjian’s novels Soul Mountain and One Man’s Bible and his short story collection Buying a Fishing Rod for My Grandfather. She is an honorary associate in the School of Languages and Culture at the University of Sydney.
Loading...
or
Not Currently Available for Direct Purchase