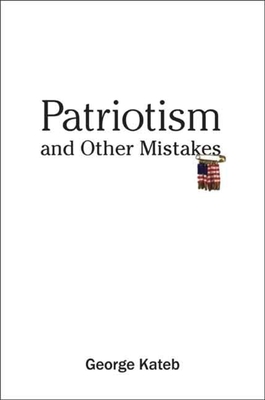 Patriotism and Other Mistakes

George Kateb has been one of the most respected and influential political theorists of the last quarter century. His work stands apart from that of many of his contemporaries and resists easy summary. In these essays Kateb often admonishes himself, in Socratic fashion, to keep political argument as far as possible negative: to be willing to assert what we are not, and what we will not do, and to build modestly from there some account of what we are and what we ought to do.

Drawing attention to the non-rational character of many motives that drive people to construct and maintain a political order, he urges greater vigilance in political life and cautions against “mistakes” not usually acknowledged as such. Patriotism is one such mistake, too often resulting in terrible brutality and injustices. He asks us to consider how commitments to ideals of religion, nation, race, ethnicity, manliness, and courage find themselves in the service of immoral ends, and he exhorts us to remember the dignity of the individual.

The book is divided into three sections. In the first, Kateb discusses the expansion of state power (including such topics as surveillance) and the justifications for war recently made by American policy makers. The second section offers essays in moral psychology, and the third comprises fresh interpretations of major thinkers in the tradition of political thought, from Socrates to Arendt.