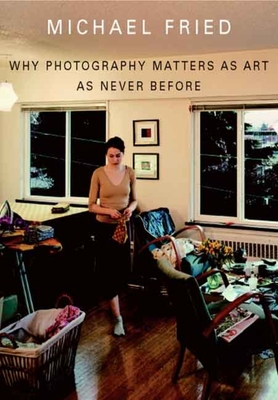 Why Photography Matters as Art as Never Before (Hardcover)

From the late 1970s onward, serious art photography began to be made at large scale and for the wall. Michael Fried argues that this immediately compelled photographers to grapple with issues centering on the relationship between the photograph and the viewer standing before it that until then had been the province only of painting. Fried further demonstrates that certain philosophically deep problems—associated with notions of  theatricality, literalness, and objecthood, and touching on the role of original intention in artistic production, first discussed in his contro­versial essay “Art and Objecthood” (1967)—have come to the fore once again in recent photography. This means that the photo­graphic “ghetto” no longer exists; instead photography is at the cutting edge of contemporary art as never before.

Michael Fried is J.R. Herbert Boone Professor of Humanities and the History of Art at The Johns Hopkins University.


Praise For Why Photography Matters as Art as Never Before…

"Fried . . . selects particular pictures to address and teases out the ways in which their meanings are created and transmitted. In these cases his writing is engaging, intriguing, and often delightfully paradoxical."—Andy Grundberg, American Scholar
— Andy Grundberg

"Fried's book—more than any other I have read—challenges its readers to interpret more cogently the resurgence of the tableau in photographic form. The gauntlet has been tossed."—Robin Kelsey, Artforum
— Robin Kelsey

“A powerfully argued book, this is the new benchmark against which future discussions of photography must stand.”—Ottawa XPress
— Ottawa XPress